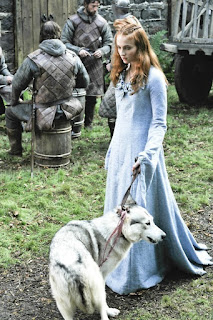 [Spoilers through A Feast for Crows.]

Ned’s statement that “She was a Stark of Winterfell... This [the crypts] is her place” [GOT, 43] refers to Lyanna, but it could just as easily relate to Lady, Sansa, Arya, or even, in some contexts, Catelyn. Arya’s links to the north are the most explicit, with her consistent use of wolf imagery, but Catelyn, too, seems to become more of a ‘Stark’ as the series goes on, without forsaking her Tully heritage. Catelyn’s first chapter in Game demonstrates her ‘otherness’ from the Starks [GOT, 24], but this is not a reading of the character that can be sustained throughout the novels. Catelyn adopts the Stark motto: “Because they are the knights of summer, and winter is coming.” [COK, 256] and becomes an increasingly ‘cold’ portent of doom as her sufferings increase, holding fast to Ned’s values and ideals even as she is willing to be more pragmatic than her husband.


When he is forced to kill Lady, Ned says, ‘She is of the north. She deserves better than a butcher’, and he insists that Lady’s bones are taken to Winterfell [GOT, 158-9]. Lady’s essential links to the north mirror Sansa’s; she continually draws strength from the north and from her Stark heritage.‘I am a Stark, yes, I can be brave,’ [SOS, 384] she reflects, and, later in Storm, thinks ‘If Lady was here, I would not be afraid.’ [SOS, 799] and ‘I must be brave, like Robb.’ [SOS, 802]. Sansa’s snow castle scene at the Eyrie has been much discussed, as it emphasises her links to Winterfell [SOS, 1100] but there are a series of less obvious links in the novels as well. When Ned is imprisoned in Game, his language prefigures Sansa’s castle: ‘He made plans to keep himself sane, built castles of hope in the dark’ [GOT, 629]. More subtly, Catelyn’s comments on Brienne –‘There are walls around this one higher than Winterfell’s’ [COK, 409] – recall Sansa’s ‘icy’ courtesy armour and how she uses northern coldness as a defence, especially as we know Brienne can be as romantic and naïve as Sansa inside her walls. Another troubling note in Sansa’s Feast characterisation, indeed, is when she stops using Robb or other Starks as a model of bravery, and turns to Littlefinger instead: ‘Feeling near as bold as Petyr Baelish, Alayne Stone donned her smile...’ [FFC, 417] – although, perhaps it is crucial that the girl seeking courage here is Alayne, not Sansa Stark.
Posted by Laura Tisdall at 16:16