Last weekend I went to Hay-on-Wye for a spot of book shopping, as I did last year - although this year I managed to be rather more restrained with my purchases. Here are my two hauls (apologies the pictures are so small):
2010... 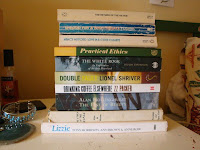 From top down:
The Return of the Native by Thomas Hardy: I think my thoughts on this have already been thoroughly discussed in my massive Hardy blog post.
Shroud for a Nightingale by PD James: a massively dated but still enjoyable early Adam Dalgliesh mystery. (Any advice as to how to pronounce his last name would be gratefully received - I don't think it can be Dalg-leash as I have been saying...)
Love In A Cold Climate by Nancy Mitford: actually an omnibus with The Pursuit of Love, which I enjoyed more, although both were rather too light & bright & sparkling...
Practical Ethics by Peter Singer: Unfortunately, as yet unread.
The White Rock by Hugh Thomson: An interesting mix of Inca history and current-day exploration of Peru, although I found his later Cochineal Red, which covers pre-Inca civilisations, a more engrossing read.
Double Fault by Lionel Shriver: As with anything by Shriver, brilliant and depressing. It's billed as being about marriage, but I thought it was equally about ambition, and how single-mindedness and commitment can be both a strength and a fatal flaw.
Drinking Coffee Elsewhere by ZZ Packer: I have a difficulty with short stories, except the very best; they are frequently enjoyable and well-written at the time, but then I forget them completely. As I have this collection. Apologies ZZ Packer.
The Line of Beauty by Alan Hollingshurst: Tremendously well-written but I struggled a little with the plot, which veers from gay culture (interesting) to 1980s politics (not so much, although the scene where lead character Nick dances with Margaret Thatcher at a party, to the disgust of her cronies, is classic). I would love to read Hollingshurst's latest novel, as it sounds more my thing.
The Story of the NSPCC: An institutional history of the organisation published in the 1960s and purchased by me for my PhD. Hilariously patronising in places towards errant parents, not all of whom are strictly abusive.
Lizzie: A Victorian Lady's Amazon Adventure: Again for research purposes, this time for my novel.
... and 2011 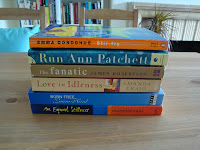 Stir-fry by Emma Donoghue: I've already read this one and loved it. I was interested in reading the novels she wrote before Room, which I had mixed feelings about, and I wasn't disappointed - although this is clearly a first novel, it's about twice as good as Room, and now I can't wait to read her second novel, Hood. The coming-of-age theme here is a bit tired (the plot follows seventeen-year-old Maria who moves in with a lesbian couple after starting university and begins to question her own sexuality), but the characters are incredibly vivid and the setting, 1990s Dublin, is very well conveyed; without resorting to heavy dialect, which I find difficult to read, Donoghue effectively portrays the turns of phrase of the Irish characters, and description is also sparse but telling.
Run by Ann Patchett: I loved her latest novel, State of Wonder, and was warned away from Bel Canto, so I've decided to try this one. I was excited to find I'd bought a signed copy by accident, as the bookseller hadn't noticed or advertised it.
The Fanatic by James Robertson: A Scottish writer whom I have mixed feelings about - I loved The Testament of Gideon Mack but found Joseph Knight hard going. This is set in Edinburgh, however, which is a good start - I find the city fascinating.
Love In Idleness by Amanda Craig: I've already read this as well, and it's terrible. I thought her Hearts and Minds was an engrossing light read and was eager to try this one, especially as it features the lead character of that novel, Polly, whom I'd liked. Unfortunately this earlier novel is just awful - the characters are all horrible middle-class and upper-class caricatures and Polly becomes immensely unlikeable; she spends her time in the holiday villa where this is set being a deliberate martyr while congratulating herself on being nicer than everyone else. This reaches a peak when she reflects that best friend Hemani has been ungrateful because Polly was good enough to carry on inviting her out to dinner parties after Hemani's divorce, when everyone else shied away from inviting a single woman. Perhaps this is meant to be tongue-in-cheek, but as all the other characters, with the partial exception of Hemani, are written in the same vein, the book becomes very alienating. Annoyingly, it's also meant to be a modern version of A Midsummer Night's Dream, leading to some convoluted plotting and frankly unbelievable twists. Avoid.
Born Free by Laura Hird: I've wanted to read this ever since I saw an extract from it in Ali Smith's The Reader. I'm starting it now, so hopefully it will be good (and it strikes me that she's Scottish as well, so I'm doing well on the Celtic writers - pity I lack a Welsh representative)
An Equal Silence by Francesa Kay: This won the Orange Prize for New Writing a couple of years ago. I've read the other two contenders for that year and they were both hopeless, so if this can show any merit at all it will have been a worthy winner...
Posted by Laura Tisdall at 10:37 No comments:

Not too thrilled by the Booker shortlist...

... because the only two books I'd read from the longlist, both of which I didn't like at all, have both been shortlisted.* The culprits are Jamrach's Menagerie by Carol Birch, which I blogged about here, and Pigeon English by Stephen Kelman. I'm glad to see the Julian Barnes on there, and disappointed that Barry and Hollingshurst have been omitted, for the purely lazy reason that those are the three books I would like to read anyway. Other thoughts?

PS Posting more frequently has failed for the time being due to a lack of internet access in my new flat, but I should have full reviews of Last Man In Tower by Aravind Adiga and How To Paint A Dead Man by Sarah Hall coming up.

*This is particularly annoying because usually when I have read books from the longlist they are never shortlisted, leaving me with the full six still to read if I want to have a go at pretend-judging it.
Posted by Laura Tisdall at 14:36 No comments: