1. ‘Lady Catelyn always wanted her to be like Sansa’ 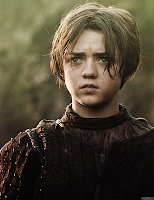 [Game of Thrones/A Song of Ice and Fire: No spoilers past Storm of Swords or Season 3 of the TV series]

Throughout the novels, it is clear that Catelyn loves all of her children and would do anything to keep them from harm. However, her comments about Arya, at first glance, seem more critical than her assessments of her other children, especially Sansa. The idea that Catelyn was overly hard on Arya, disliked her tomboyish inclinations, and made Arya doubt her mother’s affections seems to receive further support when Arya comments in Storm after she realises that Beric intends to ransom her back to her family:

“Well,” Arya said, “my hair’s messy and my nails are dirty and my feet are all hard.” Robb wouldn’t care about that, probably, but her mother would. Lady Catelyn always wanted her to be like Sansa, to sing and dance and sew and mind her courtesies.’ [SOS, 537]

Arya’s thoughts are reflected in Catelyn’s own internal monologue, and in her comments to Brienne on each of her children:

‘Sansa would shine in the south, Catelyn thought to herself, and the gods knew that Arya needed refinement.’ [GOT, 64]
‘And Arya, well... Ned’s visitors would oft mistake her for a stableboy if they rode into the yard unannounced. Arya was a trial, it must be said. Half a boy and half a wolf pup. Forbid her anything and it became her heart’s desire. She had Ned’s long face, and brown hair that always looked as if a bird had been nesting in it. I despaired of ever making a lady of her. She collected scabs as other girls collect dolls, and would say anything that came into her head. I think she must be dead too... I want them all dead, Brienne. Theon Greyjoy first, then Jaime Lannister and Cersei and the Imp, every one, every one.” [COK, 574] 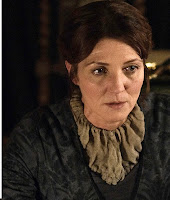 However – especially as Catelyn’s near-collapse at the end of her monologue to Brienne as she considers the near-certainty of Arya’s death demonstrates how much she loves her youngest daughter – I think there is a more fruitful way to read these passages. It seems much more likely that, rather than Catelyn being the model of a perfect noble lady, with Sansa following in her footsteps and Arya conspiciously failing to meet her standards, Catelyn is so critical of Arya precisely because she sees more of herself in her. From Catelyn’s point of view, Arya must learn to conform to the rules of elite femininity if she is to be happy in the society she’s been placed in, just as Catelyn herself had to learn to fit in – so her criticisms of Arya stem primarily from concern and love, rather than a desire to put her younger daughter down.
In this context, Catelyn’s initial reaction to Brienne, who is also a woman out of her place, is revealing. When she is told that the warrior she saw fighting is Lord Selwyn’s daughter, she is appalled, but, more revealingly, pitying:
“Daughter?” Catelyn was horrified... Pity filled Catelyn’s heart. Is there any creature on earth as unfortunate as an ugly woman? [COK, 252]
However, Catelyn is not a woman wedded to social convention, but a woman aware of its power. A few paragraphs later, she is already reassessing whether she ought to have pitied Brienne: ‘when Renly cut away her torn cloak and fastened a rainbow in its place, Brienne of Tarth did not look unfortunate.’ [COK, 252]. Of course, she goes on to accept Brienne’s oath of service, and takes her into her trust and counsel. This reflects her reaction to Dacey Mormont, a woman who is comfortable in her role as a female warrior, and so convinces Catelyn to feel comfortable around her, as well. We see her defending Dacey’s right to fight for Robb in Game, telling the men who ‘mutter’ about it ‘This is not about the honour of your houses... This is about keeping my son alive and whole.’ [GOT, 697] This statement reflects Catelyn’s innate pragmatism, but also indicates that she does believe a woman can fight as well as a man. In Storm, when she is in closer contact with Dacey and her mother, her positive impression is confirmed: although she still thinks that ‘mail and leather’ is ‘queer garb for a lady’, she doesn’t allow this to govern her assessment, thinking ‘yet Dacey and Lady Maege seemed more comfortable, both as warriors and as women, than ever the girl from Tarth had been.’ [SOS, 623] 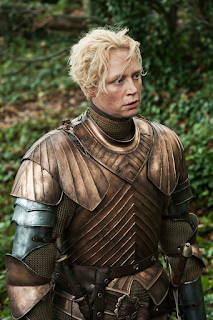 As this suggests, what seems to bother Catelyn most about Brienne is not that she has taken up arms but because she is clearly unsure of how to play the role she has adopted, hopelessly in love with Renly and obviously vulnerable. Unlike Dacey, Catelyn seems unconvinced that Brienne is really happiest assuming a ‘male’ identity, as she demonstrates when she orders gowns for her [COK, 474]. What these interactions indicate is that Catelyn is open-minded enough to accept the idea of a female warrior in theory, but finds it difficult to believe that a woman can transgress social conventions so dramatically unless the evidence is in front of her eyes. With such slim odds of success, it’s unsurprising that this is not a path she wants for her nine-year-old daughter, even if we know that Arya – perhaps, in contrast to Brienne – can successfully combine both her love of fighting and her femininity. (Interestingly, both Arya and Catelyn seem to have no problem with the idea of a woman in power – Arya protests “The woman is important too!” in relation to coats of arms [GOT, 73], and Catelyn tells the Blackfish “A woman can rule as wisely as a man.” [GOT, 366] This is not a belief that Sansa seems to hold, or at least, has not considered.)
Catelyn’s own upbringing accounts for her recognition of the power of social roles. We know that, as the oldest child, Catelyn received a rather unconventional upbringing, essentially acting as her father’s heir until her much younger brother, Edmure, was born. And even after Edmure’s birth, Lady Minisa’s death in childbed left Catelyn to run the household and act as lady of Riverrun from a relatively early age. This early responsibility (which mirrors Sansa’s current experiences at the Eyrie) does seem to have instilled an exceptionally strong sense of duty into Catelyn. Her only mention of her mother is revealing:
‘Lady Minisa Tully had died in childbed, trying to give Lord Hoster a second son... She was always so calm, Catelyn thought, remembering her mother’s soft hands, her warm smile. If she had lived, how different our lives might have been. She wondered what Lady Minisa would make of her eldest daughter, kneeling here before her... I have lost my daughters, Robb does not want me, and Bran and Rickon must surely think me a cold and unnatural mother. I was not even with Ned when he died... [COK, 363]
This quote is especially interesting because, although it is so brief, it tells us a huge amount about Catelyn. Firstly, that she is not her mother’s daughter; of all the qualities I associate with Catelyn, ‘always calm’ is not one of them. Indeed, Cat seems to be continuously in action, grieving, thinking, planning and acting. Secondly, Cat herself recognises that she might have been a very different person if she had had a mother’s care during her young-adulthood. Thirdly, she segues from thoughts of her mother into a consideration of how she herself has failed in her two key feminine roles; as a mother, and as a wife. Although Catelyn has always tried to do her duty, she believes that, by, ultimately, not being Minisa, she has done everything wrong, and that Minisa might not approve of her. Like Arya, she feels that she has been judged by her mother, and come up wanting.
Posted by Laura Tisdall at 10:57