To Be Read Pile To Be Dead Pile This Year

This post is simply to make a public announcement that I am tired of having a TBR pile, and hope to get rid of it this year. My pile is not nearly as large as many people's, and only comprises about ten or fifteen books, so this shouldn't be too much of a challenge, but I found throughout this year that although I read many books from the pile, I added to it at about the same rate as I took away, thus maintaining its size. My resolution is therefore to read at least two books from the pile for each one I add - I'm tired of buying exciting new books but not being able to read them right away.
Top 10 books of the year coming on 31st December - I hope to squeeze one or two more reads in before then, so they should be allowed to qualify! (I'm currently reading Sarah Hall's brilliant The Beautiful Indifference - she's one of those rare writers who can write novels and short stories of equal calibre).
Posted by Laura Tisdall at 15:53 No comments:

'They're ill to tame, the border men' 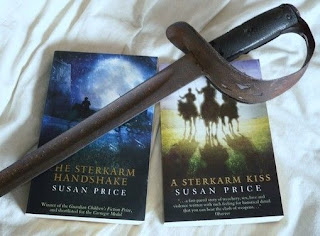 I'm not, on the whole, a big fan of teenage fiction. While the children's books I loved when I was little, such as Marianne Dreams, Goodnight Mister Tom, Ballet Shoes, Islands in the Sky, The Lotus Caves and yes, even the early Harry Potters, still give me great joy and satisfaction when I re-read them today, I found that I rapidly grew out of the teenage fiction I used to enjoy when I was thirteen or fourteen. Far more than fiction for younger readers, it seemed to be aimed solely at one age group, and held little interest for anyone who didn't fall within its remit. Novels such as Melvin Burgess's Junk now simply feel shallow to me, a sketchy version of what much adult fiction does better, even though I loved it when it was first published. Teenage fiction also, notoriously, doesn't sell nearly as well as either adult fiction or that aimed at the 8-12s, despite the success of a number of crossover novels such as The Curious Incident of the Dog in the Night-Time (which, to be honest, I thought was over-hyped and over-praised anyway!)
However... every so often, I read a novel marketed at teenage readers that is simply brilliant, far better than most of the adult fiction that I read, and has been overlooked in part because of the age category the publishers happened to slot it into. I think, possibly, that is what has happened to Susan Price's The Sterkarm Handshake and its sequel A Sterkarm Kiss. These two novels feature no lead characters under the age of about twenty, but seem to have been labelled as teenage because Price was already known as a children's writer (although her Ghost Drum books are hardly light, fluffy reading either). But I can't recommend them enough, and this is why:
- The basic plotline concerns a 21st-century company, FUP, [futuristic in the context of a pair of books written in the 1990s!] creating a time tube through to an alternative-universe 16th century Scottish borderlands in order to exploit the natural resources that still exist there, such as oil and gas, and to begin a tourism industry through which 21st-century tourists can come and gawp at the locals. However, their plans are being thwarted by the uncooperative local Sterkarms, the most notorious of 'the border men'. What is there not to love about that set-up?
- The Sterkarms are a fantastic set of characters, loveable and ruthless by turn. For example, as a predominantly left-handed family, they build the staircases in their towers to go round anti-clockwise, rather than clockwise, to make them easier for left-handed swordsmen to defend - and putting the right-handed enemy at a disadvantage.
- More seriously, as historical novels they work more convincingly than almost anything else historical I've ever read, perhaps because the intrusion of a modern perspective makes the explanation of Sterkarm customs more natural, but primarily because Susan Price never lets her extensive research interfere with the telling of the story. The reader feels as if they've really got to grips with the way daily life in a Sterkarm stronghold runs, and yet as though everything they've learnt has been completely necessary to their understanding. Price's bold attempt at guesstimating what Sterkarm English might have sounded like is also notable.
- The sixteenth-century mindset is presented as genuinely different from the modern mind - this is, in fact, a key stumbling-block for many of FUP, such as the arrogant James Windsor, who see the Sterkarms as children in fancy dress. Andrea Mitchell, working as an interpreter and observer of Sterkarm customs, is our key point-of-view character for this; despite her academic knowledge, she finds it increasingly difficult to accept the Sterkarms' casual attitude to violence - although the Sterkarms are equally appalled by modern warfare and the extinction of species. Andrea herself, large and so not conventionally beautiful in the modern world, finds her reception very different in the sixteenth century, where she is close to the healthy feminine ideal. These are often minor details, but add substantially to the verisimilitude of this invented world - and sadly, are all too rare in most historical novels.
- The complicated intrigues between the Sterkarms and FUP are truly gripping, and I think would appeal to fans of George R.R. Martin's A Song of Ice and Fire - a scene in the second novel bears remarkable resemblance, in fact, to an infamous sequence in A Storm of Swords. Price also utilises one of the best devices for generating a plot for a sequel I've ever read - simply go back in time and start again. Although not exactly...
The only reason not to read these two books, I think, is that they seem to form part of an incomplete trilogy, with the ending to A Sterkarm Kiss left on a rather infuriating cliffhanger. As it seems unlikely there will be a third book now, it depends on whether you're willing to deal with this or not. Personally, while the ending is unsatisfying, it didn't really lessen my enjoyment of the book. And you can always just read The Sterkarm Handshake! Suffice it to say, I think these shouldn't be missed. Just remember: never shake hands with a Sterkarm...
Has anyone else read these? I'd love to hear from you if so.
Posted by Laura Tisdall at 14:56 6 comments:

Books of the year, almost

A meme borrowed from Catherine Pope:
Using only books you have read this year (2011), answer these questions. Try not to repeat a book title.
Describe yourself: The Female of the Species (Lionel Shriver)

How do you feel: There But For The (Ali Smith)

Your best friend is: The Help (Kathryn Stockett)

If you could go anywhere, where would you go: Far From the Madding Crowd (Thomas Hardy), perhaps to Tibet, Tibet (Patrick French)

You and your friends are: Hearts and Minds (Amanda Craig)

What’s the weather like: Love in a Cold Climate (Nancy Mitford)

What is the best advice you have to give: Solace (Belinda McKeon)

Thought for the day: Do Androids Dream of Electric Sheep? (Philip K. Dick)

How I would like to die: Happily Ever After (Harriet Evans)

This worked a bit better than I thought it would - proper post on classic teenage fiction coming up soon, when I can work out how to extract it from Blogger!
Posted by Laura Tisdall at 09:57 2 comments: