This was the first novel I'd read by Anna Quindlen, and I found the blurb on the back cover to be very misleading. I was expecting a Jodi Picoultish story about an accused woman, her complicated trial, and some soundbites about the moral 'issue' of euthanasia. Instead I got something much quieter and much deeper, a narrative which is primarily about the relationships between young professional Ellen Guelden, her dying mother, and her distant father, and which uses the central plot thread of Ellen's trial for the mercy killing of her mother largely as a framing device to explore these characters' lives.
Ellen's family situation can be summed up simply. Late in the novel, she comments that her father's problem is that he divides women into two types, 'those who are all heart and those who are all head', and has underestimated both herself and her mother, Katherine, by assuming that Katherine was all heart and Ellen is all head. By this point, Ellen has clearly proven herself to be capable of deep empathy and selflessness, giving up her job in New York to come to care for her mother in her final months, and ironically, it was her father's accusation that she was 'heartless' that convinced her to take this action. However, before her mother became ill, her approach to her family was neatly dichotomous; rejecting her mother's loyal homemaking, she tried as best she could to please her father in every way. When he reads a poem aloud and then dismisses it as trashy, her relief is almost painful that she didn't have a chance to comment on how beautiful she found it. Unsurprisingly, Ellen's father is not the paragon she believes him to be - and her gradual realisation of this throughout the course of the novel is realistic, but hardly unexpected.
One True Thing is almost too neat a tale, but it is partially saved by the details of Ellen's narration. Characters who are quiet, good, and kind, like Katherine Guelden, are ferociously difficult to convey in fiction without making them seem idealised, dull, or annoying. Quindlen manages to put Katherine on the page without diminishing the reality of her complex character. Her evocation of the small college town in which they live, Langhorne, is also beautifully conveyed - from Ellen's early observation that college towns always feel strange to those who live there permanently, watching the students come and go, to her descriptions of the Christmas-tree decorating festival and the emptiness of the town in the holiday season. Plot is almost non-existent, and even a twist at the end of the novel takes its dramatic force not from the revelation it provides but in the reassessment it forces us to make of the characters we've grown very close to. And yet this is only a partial salvation. Reading this novel, I was absorbed in the world Quindlen created, but worried that it wasn't all a little underplayed - it did not strike me as a novel I would remember for long, however much I had enjoyed it at the time.
And yet... Perhaps the hidden power of this novel lies in the second of Ellen's father's spurious categories, listening to it not with the head but with the heart. Tellingly, Ellen comments after this anecdote that she feels she got the worst of the deal from her father's division of labour, implying that she would choose the heart over the head now. Any decent life, or decent novel, needs to balance both, but the particular quality that One True Thing possesses is not easily explained. Quite honestly, you might just have to read it for yourself.
Posted by Laura Tisdall at 16:24 No comments:

Another world among the mountains 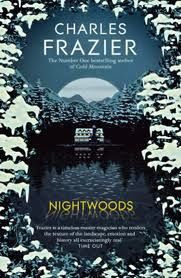 It's a long time now since I read Cold Mountain, Charles Frazier's acclaimed first novel, but I remember it as an intense, immersive read, persuading the reader to slow to the pace of its narrators and truly take in the details of the mountains in which they find themselves. That same powerful writing is present in Nightwoods - but it's coupled with a rather cliched plot-line that, in my opinion, weakens this otherwise excellent novel. Luce, a young woman living by herself in an isolated lakeside lodge, finds that she has to take on her sister Lily's children after Lily is murdered by her husband. In a second thread, Bud, the murderer, newly paroled, seeks out the children, as he believes they have the money that Lily took from him shortly before he killed her. Luce's attempts to build a relationship with the children are related alongside Bud's journey to the town where they live and his forging of relationships with the locals through his self-appointed post as bootlegger, including local sheriff Lit, Luce's father.

I found the first half of this novel utterly compelling. Frazier beautifully evokes the isolated area of North Carolina in the 1950s that is his setting, and his treatment of Luce's story is equally well-written. Although Bud is a less interesting character than Luce, the careful attention to practical detail in his plotline removed it from the realm of thriller and made me want to read on; for example, when on the run from a couple of minor robberies, he decides to dump the too-recognisable car he's driving: 'He knew enough about sinking cars from teenage joyriding to roll the windows down and open the trunk and hood.' Frazier brings locations to life through imaginative and unexpected descriptions, such as the Roadhouse bar which a number of the characters pass through, where 'Daylight blared gritty through the opened door and cast a vampire-killing trapezoid onto the nineteenth-century wood floor', or a distorted view of impossibly tall mountains; 'Have to be in Tibet to validate some of those upper peaks.' Luce is similarly illuminated through brief recounting of incidents from her past, such as a high school classmate's memory of her competing in a beauty pageant - something completely at odds with her present-day life.

Unfortunately, I found my interest waning somewhat in the second half of the novel, although it was still a good read. Bud's search for the money became the focus of the narrative, and this plot felt over-familiar to me - a re-hash of The Night of the Hunter or any number of other stories involving orphaned children and greedy villains. Given the importance of this plot thread, however, it seemed to be resolved rather too easily. Frazier's writing is still fantastic - a scene involving Bud and a group of ageing hunters high in the mountains is particularly well-evoked - and so to an extent, the weak plot is carried, but I found myself questioning why we needed it. For me, the parallel lives of Luce, Bud and a couple of other characters were enough to hold my interest - there seemed no need to attempt a thriller-type climax to what is, like Cold Mountain, an intense novel precisely because the reader needs to adapt to its particular pace.

Despite these criticisms, I still thought this was a fine novel, and would highly recommend it to fans of Cold Mountain. I've also now been persuaded to check out Frazier's second novel, Thirteen Moons, as it's obvious that his talent wasn't just a flash in the pan. Has anyone else read this? What did you think, if so?

Posted by Laura Tisdall at 16:08 No comments: