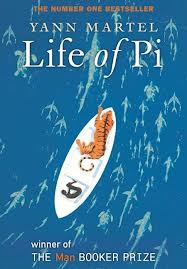 As I wrote earlier on this blog, I avoided reading Life of Pi for so many years because I mistakenly believed it was a magical realist novel about a magical tiger. I say ‘mistakenly’ about both these things because, not only is the tiger, Richard Parker, not remotely magical, I think to read Life of Pi as an example of magical realism is a profound misreading of the novel. Rather than incorporating magical elements into an otherwise realistic setting – if we’re going with the Wiki definition of magical realism – Life of Pi instead explores storytelling, allegory, and belief in the widest sense of the word, and, to my relief, doesn’t depend on anything supernatural to work.

One major reason this novel does work, perhaps, is because it’s utterly charming. I fell in love with Pi from the moment he decided to shed his hated childhood nickname, ‘Pissing’, and enacted a cunning plan when arriving at a new school, writing on the board ‘My name is Piscine Molitor Patel, known to all as Pi Patel.’ The scene where he is confronted by a Christian priest, a Muslim imam, and a Hindu pandit, all of whom think he is a new convert to their faith, is charming in a very different sense; with the three men and the three paths to choose from, it recalls folktale choices, and illustrates both Pi’s idealism but lack of irritating naivety, as he knows he’s in trouble but refuses to acquiesce to their conception of faith. The novel avoids sentimental anthropomorphism with Pi’s father, a zookeeper’s, lesson on the innate savagery of animals, but nevertheless, when Pi is marooned on a lifeboat with Richard Parker, I grew to love him as well. Pi’s struggle to survive after the shipwreck is riveting in itself, putting aside all allegorical considerations, and his eventual discovery of the algae island takes his story to a new level of surrealism but avoids loosening the narrative’s grip.

It would be pointless to review this novel without discussing the ending, so look away now if you want to avoid spoilers. From a brief review of internet discussions, it seems that the ending of Life of Pi has caused quite a lot of controversy. In brief, Pi’s original story of himself, a hyena, a zebra, a female orangutan, and a tiger on a lifeboat, the vicious murder of the zebra and orangutan by the hyena, and the tiger’s dispatch of the hyena, transmogrifies into an even more gruesome tale where the zebra is an unknown sailor, the orangutan his mother, the hyena the ship’s cook, and he both boy and tiger. Martel himself suggests one reading of the two stories we are presented with via the two Japanese observers of Pi’s tale, who instantly decide that the original collection of animals simply match up to the humans who actually were on the lifeboat. We are invited to believe that Pi’s tall tale of animals was simply a psychological defence against the horrors he has witnessed, and his double identity a way to separate off the savage, cannibalistic part of himself in a type of psychoanalytical identity split. The book goes further, however, when we return to a theme that was raised earlier in the novel, when the religious Pi considers the plight of a dying agnostic: ‘if he stays true to his reasonable self might... to the very end, lack imagination and miss the better story.’ Similarly, the Japanese observers decide that ‘The story with animals is the better story’ and this is the one they eventually believe.

It seems that much of the controversy about the ending has arisen from the idea that the novel is pressing a religious message: that we want to believe in the gripping story ‘with the animals’ that we have been following for so many pages, and refuse to accept the horrific, sketchy reality we are presented with instead, but to do this we have to accept Pi’s assertions about God and belief. However, I think such an objection results from a misreading of the novel. It seems to be that both Pi’s stories are as unlikely as each other, for very different reasons, and one has to wonder if Pi ever had any company on his lifeboat at all. He speaks of his ‘fierce will to live’ and the fact that he will ‘fight to the very end’ but this seems, later, to be linked to Richard Parker: ‘he pushed me to go on living... without Richard Parker, I wouldn’t be alive today to tell you my story’ and it seems to me that an equally plausible reading of the novel would be to postulate that Richard Parker is an invention, that Pi is alone, and that the story of their survival on the lifeboat symbolises the symbiosis between ‘God’/man’s higher nature – represented by Pi – and the animal energy and will to live represented by the tiger. This also makes sense of the parallels between Pi’s description of how to gain authority over a zoo animal and make it believe that you are the alpha, and the earlier references in the novel to God only existing if you believe in him. Pi’s struggle is to keep both parts of himself in existence, and he realises that if he loses either, the psychological trauma will be such that he’ll lose the will to survive. This reading reminds me strongly of Pincher Martin, William Golding’s disturbing account of a shipwreck survivor’s war within himself, which also features a switchback ending, and seems much more resonant than either of Pi’s inadequate tales.

However, I think something else important to consider is that, even if we accept Pi’s assertion that the tiger story simply is ‘the better story’, this is not a command to believe in God, but an argument that such stories, even if not ‘true’, exert a pull on humanity that is greater than the bare facts of the matter. Again, I was reminded of another novel: Ron Currie’s God is Dead, a collection of interlinked short stories that explore what might happen to the human race if we knew that God had existed but is now dead. In short, Currie’s answer is that we would cease to exist, or find other beliefs: the stories range from a teenage suicide pact to a new society which worships the young. Both Martel and Currie seem to me to be recognising an essential truth: to deny the human need for story and myth is as dangerously fundamentalist as insisting your version of the story is the only one that means anything, and that if religion no longer existed, something as mythical would grow to fill the gap. Perhaps what we're really meant to take away from the novel is that, like the versions of truth offered by the priest, imam and pandit, choosing between the three different versions of Pi's story is not a choice it is important to make.

(As a final note, it was interesting to read this novel alongside Alex Garland’s The Beach – a novel which is in some ways very different, but shares a similar theme of human psychological breakdown under extreme environmental conditions. (And there's a Richard!) It also reminded me how fantastic that novel is, and made me question why Garland has never written anything nearly as good – with the exception of the screenplay for Sunshine, which draws on the same strengths that make The Beach such a gripping read. Readers might remember that I thought he made a terrible mess of the screenplay for Never Let Me Go. End of digression!)

[For further posts in the Tigers series, see the links at the end of this post.]
Posted by Laura Tisdall at 09:16