'Mr Jameson usually made me happy' 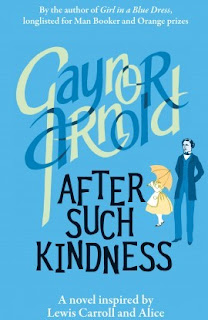 A surprise bonus post because I have finished all my packing for Berlin especially early and am waiting to leave to catch a train... and because this book is so fantastic it deserves to be blogged about. I very much enjoyed Gaynor Arnold’s Girl in a Blue Dress, but with After Such Kindness, she has excelled herself. Note that there will be spoilers for this book throughout this post; as the elliptical reviews of it in the Guardian and the Independent indicate, it’s impossible to write satisfactorily about it without spoiling the central twist.

This novel takes as its point of departure the relationship between Charles Dodgson – alias Lewis Carroll – and Alice Liddell, whom he famously photographed as a child in various states of undress. However, other than appreciating the many Wonderland references in this novel, I’m not sure if keeping this historical connection in mind while reading helps more than it hinders. Having read the recent The Mystery of Lewis Carroll by Jenny Wolf, which forcefully argues that Dodgson was not unusual in his tastes, situating his predilection for innocent little girls within the context of its time, it’s hard to get such debates out of your head if you’re focusing on real-life parallels, and at first I kept trying to assess whether the Dodgson character in this novel, John Jameson, was ‘guilty’ or ‘innocent’. Reading the novel in this way is pointless for three reasons. Firstly, Arnold clearly notes that the novel is not meant to be simply a disguised retelling of the Dodgson-Liddell relationship; secondly, she is obviously more interested in the fetishisation of innocence and denial of natural sexual feeling of the times than in indicting Jameson of anything; and thirdly... well, read on.

To build on the second point, Arnold notes in the afterword that Dodgson was not alone in his views on ‘child-women’ as the ideal. As she splendidly analyses in Girl in a Blue Dress, Dickens was also obsessed with innocence, as were Ruskin and Kingsley, and she uses the celebrated diarist the Rev. Francis Gilbert as an example of an ‘apparently well-balanced man’ who also bought into this cult. Therefore, it’s important from the beginning to realise that this book is not about painting John Jameson as a deviant monster – difficult as some of his thoughts are to stomach – but about criticising a culture that suppresses both men and women’s natural expression of their sexuality and subverts it into highly problematic channels. The victim here is the Alice Liddell figure, Daisy, who is eleven when she first meets Jameson and still only twenty when she looks back to her childhood experiences as a young married woman. We realise swiftly that Daisy is dealing with a childhood trauma; she has violently resisted her gentle husband’s sexual advances, has a complete memory blackout between the ages of eleven and fifteen, and is terrified when she rediscovers her childhood diary. As we read the diary along with her and realise that it deals almost entirely with her friendship with Jameson, we feel we know the story that Arnold is telling; the dreadful impact of the predatory Jameson’s abuse upon Daisy and its distortion of her later life.

However, there is a twist in this tale. As we gradually realise during the final third of the novel, Daisy’s trauma does not in fact stem from her experiences with Jameson, but from continuous sexual abuse from her father, Daniel Baxter, over her four missing years. As we already know, Daniel is enraptured by innocence as well; when he first met Daisy’s mother, Evelina, she was fifteen and wanted to join a chaste religious group of young women at Caerwen House. He viewed her as ‘an angel’ and won her by allowing her to ‘convert’ him and end his dissolute life. After a mutually satisfying sexual relationship through many years of marriage, the couple are now irrevocably separated physically because a doctor has ruled that another childbirth would kill Evelina, and Daniel turns his sexual frustration and fixation on purity onto Daisy. Again, Victorian values are implicated in the abuse, but the real tragedy is nineteenth-century society’s inability to hear Daisy’s story or to fit it into their view of reality. Jameson’s photographs are twice at fault in this narrative. A naked image of eleven-year-old Daisy acts as a catalyst for the beginning of her father’s abusive behaviour, and when her husband sees the same image, years later, he is furious with Daisy, although he has already been unable to believe her confession about her father, a reaction that she is unable to comprehend: ‘I’m horrified that Robert finds it so hard to believe that Papa was capable of wrongdoing, yet is so ready to think me a child seductress because I have taken off my clothes, and am trying to look pleasant for a photograph.’ Trapped in the Madonna/whore dichotomy, Daisy cannot account for herself in any way that her husband can understand.

Nevertheless, perhaps there is a final twist that makes the novel even more interesting than it has been already. As Daisy unravels her past, she comes to realise that her memories of John Jameson are perfectly clear; she believes that he has not abused her, claims he is not at fault, and when, at twenty, she receives an invitation from him to tea, she longs to accept it: ‘I’d forgotten how happy John Jameson always made me with his incapacity to take anything very seriously. Just to read his words makes me feel young and carefree and full of vitality, as if I have escaped into another world’. Given how wretched Daisy is at this point, the reader can’t help but breathe a sigh of relief with her, despite our serious qualms. It seems clear that Jameson did abuse Daisy’s trust, taking advantage of her respect for him to photograph her for his own gratification; he gave no thought to how his actions have seriously affected her life; and he has photographed many other little girls since. In fact, our last sight of him in the novel is his request to a new little girl, Amy, for a photograph, in language which makes a mockery of ‘consent’, even if an eight-year-old could meaningfully give it: ‘I have another question to ask you, but it’s not at all hard, because there’s only one answer and that is, yes’.

And yet, perhaps it is a measure of the bleakness of this novel that this deeply troubling relationship is also one of Daisy’s few sources of happiness. Apart from her devoted nurse, Nettie, who is dismissed early on in the book, there is no other adult who seems willing to listen to her or care for her. As Jameson says when they are forced to part, ‘I hesitated to abandon her to the Scylla and Charybdis of her vicarage life – her clever, cold mama and her wild, distracted father... But I could not force my way into the house, and I could not force Daisy out of it. I had no power at all.’ Despite knowing everything Jameson has thought and felt about Daisy, their parting, and her distress, is still deeply affecting; because we know he is leaving her to four years of hell. Her attachment to him might be written off as a form of Stockholm syndrome, but I think this would do a disservice to her recognition of the value of their friendship; how he listened to her, made her laugh, wrote puzzles and games for her, took her out of her unhappiness. Drawing together these strands, Arnold has produced a thought-provoking and complex novel which is not just about the folk-devil of the abusive stranger, but shows how, for abuse to be prevented and recognised, there must be social and cultural shifts as well as different individual choices. And in the figure of John Jameson, it indicates how relationships with such an unequal power balance can be truly positive and deeply dangerous, both at the same time.
Posted by Laura Tisdall at 13:28