‘Towards the end of any likelihood of change’ 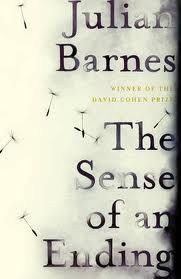 Initially, this skeletal novel seemed to me as if it had emerged from some advanced creative writing class where the author had been watching The History Boys on loop. Beginning with the narrator, Tony’s, list of memories – which demonstrate an effective use of water imagery slightly reminiscient of Philip Larkin’s 'Water' – we race forward through his life, and his disconnected musings on time and memory, ticking off these images on the way, until we reach a conclusion where every thematic sideline seems to have been neatly accounted for, and every doubling in the narrative explained. A* on a creative writing course, certainly, but why did it win the Booker?

The clue lies in the lines that close the novel, perhaps: ‘There was unrest. There was great unrest.’ Near the beginning of the novel, these lines formed the confused answer of a rather dim history A-level student, Marshall, when he was asked to sum up the reign of Henry VIII. Back to Alan Bennett again, perhaps, and Irwin’s statement that ‘If you want to understand anything, study Henry VIII.’ But there’s more to it than that. Marshall’s foolish answer, which Tony and his friends mocked at the time, preferring new boy Adrian’s cleverer remark, ‘something happened’, has gained greater weight by the end of this short novel, which may seem skeletal, but is possibly unforgettable. Having finished this frustrating book, I, for one, couldn’t stop turning it over in my head, thinking that there must be more to it than meets the eye. And perhaps there is more to it, and Julian Barnes’s triumph lies in a supremely unreliable narrator – but perhaps there really is nothing else to this story, and the triumph lies elsewhere. It is a narrative that is intended to induce unsettlement and unrest.

You see, my initial judgement of the novel stemmed from the fact that Tony’s account of his life is so thin, so airless. Characters are strongly drawn but barely seem to be physical presences; he races through even the most important chunks of the story swiftly, and seems to believe he’s done a good job in saying what he wanted to say, lingering on details like a biscuit tin that are important in his head but do nothing to illuminate a scene for a reader. His reflections on the nature of time are interesting but ultimately empty. He believes his own story is more surprising than it is, as when he reflects to himself, ‘Right, so you’re feeling guilt towards your ex-wife... and excitement towards an old girlfriend you haven’t seen in forty years. Who said there were no surprises left in life?’ Although Tony himself is unable to see it, the reader’s reaction might be that nothing could have been more predictable.

Tony seems to believe that his narrative, The Sense of an Ending, is about working out why his old friend Adrian committed suicide, and joining up, as the boys reflect in a history class early on in the novel, all the links in ‘a chain of individual responsibilities, all of which were necessary, but not so long a chain that everybody can simply blame everyone else.’ I would argue that it is about something quite different: how Tony constructs his life story and how he introduces a resolution into the narrative, even so late in the day. Tony wants his life to be more unpredictable than it has been, and so he seizes upon the reappearance of his old girlfriend, Veronica, and a letter than he wrote as a young man, to weave himself into a story that seems to promise more excitement, and, crucially, the chance to reposition himself as a more complicated person than he really is. Throughout the novel, Tony muses about ‘the woman of mystery’ (Veronica) versus ‘the woman of clarity’ (his ex-wife Margaret) and which is better, but he seems to be projecting this conflict within himself onto women. When he receives the angry letter that he wrote forty years ago to Veronica, he is appropriately horrified and apologetic at his ‘vile’ words’, but both the reader and Tony are aware of another possible reaction; this young man with his passion, pretentiousness and colour is not the Tony we know now, and we feel that as a loss.

So ultimately, this novel with all its limitations and repetitions seems to me designed to frustrate the reader; to make them wonder if there really is nothing more to Tony’s life than this, if this patchwork of memory is really all he has left of sixty-plus years. We want to put flesh back on the bones of his recollections, to make his life deeper and more meaningful, but the frightening question Barnes poses is whether this is really all there is, and if our memories are not functional enough to hold onto the fullnss of life. Are we all doomed to become as banal as Tony? As Adrian says, quoting a fictitious French philosopher, Patrick Lagrange (though it seems unlikely that Adrian himself made him up given that his history teacher also seems to recognise the name), history – and by extension, our own personal testimony – ‘is that certainty produced at the point where the imperfections of memory meet the inadequacies of documentation’.
Posted by Laura Tisdall at 09:57