'The past is always tense and the future perfect' 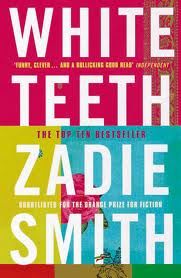 What to say about White Teeth when you come to it twelve years too late? I was barely a teenager when this book was first published, but even then I was aware of the fuss that surrounded its publication, and I’ve made many a resolution to read it over the years. And especially, what to say when you feel, perhaps unfairly, utterly underwhelmed? It would be easy to say it was inevitable – that books as hyped as this one are always disappointing – but I don’t think that’s quite true. (Loved The Secret History, loved The Tiger’s Wife.)

Having said that, it’s easy to see why Zadie Smith grabbed attention at the beginning of the millenium. Her use of language is so confident, so inventive, so surprising for a young first-time novelist – she refuses to hedge her bets at any point, and is never afraid to push boundaries just that little bit further. And it must have been, more than a decade ago, so refreshing to read such an irreverent exploration of multiculturalism, with numerous unexpected juxtapositions that alter our assumptions about what it is to live in a mixed-race society. The scene where black teenager Irie Jones goes to have her afro ‘relaxed’, has it accidentally burnt short instead, and runs off to buy the hair of an Indian woman, which she has glued to her head to cover her shame, will stay with me, I think. So will the charitable Chalfens, introduced late in the novel as benefactors to Irie and her friend Millat Iqbal, and the Chalfen matriarch’s delight at finally having troubled teenagers whom she can help, as opposed to her own too-perfect sons. These interactions between three families - the Iqbals, Joneses, and Chalfens - is where EM Forster’s influence on Smith becomes clearest, I think. Unfortunately, as in On Beauty, her straight-up homage to Forster, this is where both the strength and weakness of her approach lies.

As in Howards End and A Room With A View, Smith often turns to caricature to sketch out wider points about the society she is describing. Leonard Bast dying in a flurry of books is a scene that frequently popped up in my head as I read certain sections of White Teeth – the irony of Samad Iqbal getting laid because his devout faith attracts a white English teacher, the admittedly funny scene when Millat and a group of radical Muslims’ assault on a scientific conference about transgenic mice is thwarted by the vagaries of the London Underground. However, these caricatures, unlike most of Forster’s, are often too broad, and the humorous situations can seem too contrived to raise much of a laugh. Even Cecil Vyse from A Room With A View gets to have a moment of true humanity – ‘Nothing in his love became him like the leaving of it’ – an important counterpart to the pompous ridiculousness of his character, I’ve always thought, if not quite as poignant as Sir Andrew Aguecheek’s ‘I was adored once, too.’ I never really felt a connection with any of Smith’s characters - with the sole exception of Samad during his experiences in the Second World War - and this spark of liking swiftly faded as he aged into a laughable patriarch, believing it would be a good idea to send one of his sons back to Bangladesh, because he’d like to have sent them both, but couldn’t afford two air fares.

Howards End, of course, is about family, and White Teeth positions itself as a kind of postmodern family saga. This is perhaps the most important way in which it would have seemed so much fresher had I read it twelve years ago (and if I hadn’t been more interested in Harry Potter and Philip Pullman at that point). Having read so many other postmodern family sagas that have been published more recently, I felt it wasn’t really offering anything new. I kept on comparing it unfavourably to the wonderful Middlesex, which is bizarre, funny, and brilliant, but never loses a sense of human sympathy for its characters, and explores immigration, genetic inheritance, and sexuality in a way that’s so much lighter and yet deeper than White Teeth. So was Smith simply swept to fame on a zeitgeisty wave, and does she actually achieve little at all once you look past the dazzling exterior she builds with her words? Not exactly. Firstly, I’m not sure this is the kind of novel I would ever enjoy; it has been compared to Dickens, which I should have taken as a warning, because I do not like Dickens, I really don’t. Secondly, I do believe that this would have read as a much more astute social commentary had I been old enough to appreciate it at the time at which it was written – the essence of this kind of novel is its brilliant reflection of the status quo, and I can’t remember that from an adult’s point of view.

But with those two caveats, I don’t think this is a great book, I’m afraid; although others (Dickens fans?) might find it a good read. A long time ago, I read an essay by Smith called ‘The House that Books Built’, about the shallowness of her early work – with little life experience, she wrote, she could draw only on her internal world, full of cross-references to other novels, and so everything she created felt hollow. I disagreed with her then, and I disagree with her more strongly now. Because I don’t think that life experience is the be-all and end-all of literary realism; and because if this is what she wrote with the benefit of experience, it feels like it was built with books.

PS. I imagine all the initial reviews spent a long time analysing why this was called White Teeth, so I’m not sure I can be bothered to go into it, though Smith delights in scattering teeth metaphors throughout the novel. My considered literary opinion is roughly: it’s about roots.
Posted by Laura Tisdall at 21:34