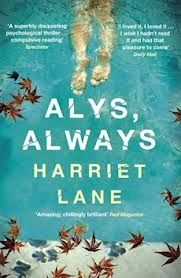 There are shades of Nicci French, Daphne du Maurier and Zoe Heller’s Notes on a Scandal in this debut novel, and it also ventures into that netherworld between popular and literary fiction that a lot of novels get lost in. However you categorise it, however, it’s a supremely enjoyable read.

Frances, a nondescript woman in her thirties who works in publishing, is driving home from a visit to her parents when she discovers a car that has skidded off the road, with an injured woman inside. As she exchanges a few words with the occupant, Alys, after calling an ambulance, she doesn’t realise that she will be the last person to see her alive. After being called by the police to make a statement, Frances becomes instantly fascinated with Alys’s family after realising that she was the wife of famous novelist Laurence Kyte (whose novels sound somewhat reminiscient of Ian McEwan’s more recent work). Although Frances is determinedly practical and realistic, she is clearly able to be seduced by fame and glamour, and so she begins inviegling her way into the hearts of the Kytes, starting with the weakest link, their teenage daughter, Polly. But what is Frances’ ultimate goal and how conscious is she of what she is doing?

Frances, who narrates the novel, is a brilliantly characterised anti-heroine. Like Harriet, the unreliable narrator of Jane Harris’s excellent Gillespie and I, she constantly challenges us to read between the lines of her narration, and to speculate on how much pre-mediation lies behind each carefully judged action. Unlike Tom Ripley, however, her motivations are hard to read precisely because her present life is not so awful. Her flat may be shabby and her job undistinguished, but she has friends, and her success at work seems likely to have increased regardless of her involvement with the Kytes, although she seems to believe otherwise. How manipulative is Frances? The best clue lies in her own statement late in the novel, when she reveals that she does plan her actions but not too much: ‘I have a few things to work out but I try not to over-think them. If I over-think, events will feel rehearsed... It’s a bit like making pastry. Light cool hands, no hurry, lots of air. Wait for the moment when the texture changes.’ It’s a perfect description of someone who desires power and control, but has realised that the best way to attain it is to be open to suggestion and improvisation.

Hence, the novel is actually a neat inversion of Rebecca; Alys may be the woman with her name on the cover, but she is increasingly forgotten as Frances's campaign continues, retreating into the past to be remembered only as Laurence's first wife. If there is a criticism to be made, it is that Frances’ narration, although well-observed and cleanly written, occasionally makes the world look rather grey, as when she observes that all her friends’ houses look essentially the same. This is obviously a product of her own world-view, and hence, hardly a flaw in the writing, but it doesn’t make for uplifting reading, and was the only reason I did not look forward to coming back to this book. Otherwise, this slim, disturbing novel is pretty accomplished, and I would recommend it.
Posted by Laura Tisdall at 08:35