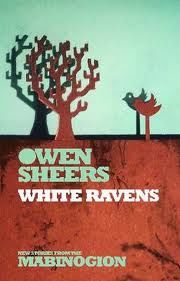 These compelling lines open Owen Sheers' recent novella, White Ravens. Eerily, this could just as easily be the opening to a book I read immediately before it, Lionel Shriver's A Perfectly Good Family. Both novels focus on the plight of a young woman with two brothers, and the pain that these three siblings cause each other when the brothers force her to choose between them; and hence, both novels hark back to a third story, the plot that Sheers consciously bases his novel on; the story of Branwen, daughter of Llyr, which forms the second branch of the Mabinogion.

I have to say that I was disappointed by Sheers' retelling, which forms part of a sequence of modern retellings of stories from the Mabinogion, an initative from small press Seren which mirrors Canongate's fabulous Myths series. I thought his Resistance and The Dust Diaries were fantastic, but the quality of his writing was not as much in evidence here, except in the early portion of the novella, which is narrated by Rhian, a young Welsh woman who has recently abandoned both her brothers after a lifetime of loyalty. She never expected to do this, Rhian explains, but after an outbreak of foot-and-mouth disease led to the shooting of all of their sheep, her brothers turned to a bloodier trade which she can no longer countenance. Like modern-day border men, they have taken to stealing sheep from other farms, locking them into a van, slaughtering them en route to London, and selling the fresh meat to high-class restaurants.

In this lopsided reflection of the famous cauldron in Branwen's story, I thought Sheers had done something quite wonderful; Rhian's voice, as is evident from the opening paragraph, is utterly convincing, and the imagery as memorable as the original Celtic myth of reattaching limbs and reanimating bodies. There are shades of the opening story, 'Butcher's Perfume', in Sarah Hall’s engrossing collection, The Beautiful Indifference, here. Unfortunately, he then switches – through the device of an old man that Rhian encounters outside the Tower of London – to a much less convincing straightforward retelling of the story, despite his assertion in the afterword that ‘I knew I didn’t want to faithfully hit every beat of the original.’ Nor should he; the power of such stories cannot be exactly reproduced in this day and age, when casual violence evokes very different responses, and his attempt to put the pieces of the Branwen tale together is clumsy, despite brilliant touches such as the weaving in of the legend of the ravens in the Tower (if they leave, England will fall). At times, it reads as if it was written in a rush, especially when it comes to dialogue, when one character, Ben, is used frequently to awkwardly gloss the novella: “We keep telling them [the Mabinogion stories] like, in different ways, but they’re still the same. An’ I reckon they’ll go on being so til’ we learn from ‘em.” Yes, I wanted to say, I get it; what next? 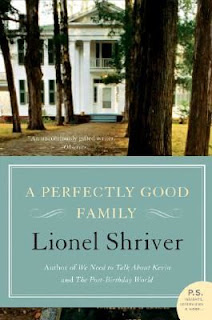 The reader could do worse than to turn to Lionel Shriver’s caustic exploration of family dynamics, A Perfectly Good Family. Corlis grew up as the middle child and the only girl, and sided with her ‘good’ younger brother Truman once he was old enough to assert a claim on her. However, now her ‘bad’ older brother Mordecai is back, to stake a claim on their family home after her mother’s death. Corlis can choose, once again, to side with Truman or with Mordecai, and implicitly, with her conventional desires or her risky impulses. What could have become a dull, small-scale narrative turns, in Shriver’s hands, into something rather fascinating. The touch of genius is the introduction of a ‘fourth child’ – the ACLU [American Civil Liberties Union] and the revelation that their parents have willed a quarter of their estate to this organisation. This switches the dynamic from a black-and-white struggle between Truman and Mordecai to a much subtler exploration of this ‘normal family.’ For Corlis, the ultimate metaphor for her mother’s life is their giant freezer, where she stored remnants of meals that nobody liked at the time for much longer than they would ever keep, and it is cathartic to clear this out after her mother’s death: ‘I had started hacking at the ice murals of dinner we didn’t finish... wondering if the impulse wasn’t to save most what you never really had in the first place...Oh, she’d saved all right, but saved what? A life of freezing. That was what my mother did. She froze.’

As Corlis explains, her mother was so afraid of losing anything good in her life that she started to turn it into a memorial before it was even over – hence, the many holidays she remembers when her mother would exclaim, “Aren’t we having a wonderful time!” – and this permanently damaged her relationship with her husband, a stickler for protocol who refused to give in even over the most trivial matters. Shriver is wonderfully observant on the minutae of life. Truman’s joy in buying new things, as if he has scored a moral victory by using up the soap or toothpaste, Corlis’s duplicity in adopting different personas as she moves between the brothers – ‘They have completely different sisters’ – and Mordecai’s triumph in securing a bank loan through utter blagging, are beautifully skewered. Again, I wondered if the ending of this novel, as with Checker and the Derailleurs, wasn’t a little too upbeat, and it’s hard to see an older Shriver letting it pass. The extreme rifts within the family seem to vanish very quickly – and Shriver is also guilty of using the all-too-common trope of ‘character improvement through sudden disablement’, when it seems much more likely that a man like Mordecai would become increasingly embittered. Still, this novel is a joy to read for its fresh perspective on family life, and I’d recommend it as heartily as any of Shriver’s work.
Posted by Laura Tisdall at 20:10