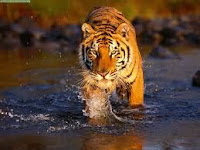 Next on the tiger theme: Jamrach's Menagerie by Carol Birch.

This novel was on the Orange long-list, but wasn't shortlisted. I wasn't sure that it would be my cup of tea, as it sounded a little Dickensian (see my first blog post for my loathing for Dickens) but Amazon offered me a free copy, so I thought why not? And to an extent, this is definitely one of those books that is undoubtedly good, and just not right for me. We follow our narrator, Jaffy Brown, from his early years in London, where he is picked up by Mr Jamrach's to help in his menagerie of exotic animals after almost being eaten by a tiger (a real one this time) to his time at sea as a sixteen-year-old novice sailor involved in whale- and-dragon hunting.

Birch's evocation of time and place is absolutely complete. The London scenes are perhaps more vivid than any pastiche of Victorian London I've ever read, and the scene on-board ship when Jaffy and his crew land a whale is suitably visceral. However, these strong set-pieces were also the problem for me. The book is based on two actual historical incidents, the first being the tiger in London in 1857, and I did feel that Birch had structured her plot accordingly to include these key scenes. The uniting thread ought to be the characters, and here I feel the book has a real weakness, rather than just not being to my personal taste. The relationship between Jaffy and Tim, his best friend, is by all accounts crucial to the success of the novel, but neither boy is conveyed with much depth at all, and Tim in particular seems to veer out of character near the end.

However, I do think this would be more enjoyable if you enjoy Dickens more than I do - so don't write it off. For a more detailed summary, I've also reviewed the book on Amazon: click here and scroll up.

Last on the tigers theme: The White Tiger by Aravind Adiga, tomorrow/ASAP.