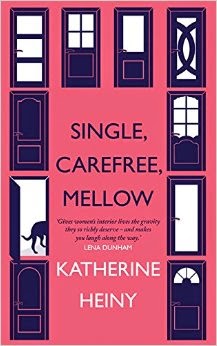 This collection of short stories focuses on an array of women who are very rarely 'single, carefree and mellow'. Indeed, that sequence of words seems to capture an ideal that lies beyond the reach of all these characters, tied as they are to marriages, affairs, families, and in one case, an ailing dog. These women's lives were not carefree and mellow before they committed to their current set of entanglements, but beyond the horizon they all seem to see the same fictional version of the lives they could have led - if not for the fact that they do love their husbands, their lovers and their children. While Katherine Heiny steadfastly refuses to judge the women that she writes about, the stories in Single, Carefree, Mellow are not quasi-feminist pleas to the reader to recognise the limits of these characters' lives, like Helen Simpson's Hey Yeah Right Get A Life or Constitutional - and in my opinion, the stories are the better for it. Any hint that Heiny had a point to make would quickly have become very tiresome, as these stories unfold in very similar ways, and yet, for me, they rarely felt repetitious or stale.

'The Dive Bar', the first story in this collection, was one of my favourites. Its central dilemma is introduced immediately: Sasha is invited for a drink by her married lover's wife, Anne. Yet what I found charming in this narrative is that it's not really about the relationship between Sasha and her love, but between Sasha and Monique, her best friend. Their intense closeness is vaguely reminiscent of the wonderful film Frances Ha, and is underlined by Sasha's chief worry about the meeting with Anne: 'She wishes she could shake the feeling sometimes that Monique sympathises with Anne entirely too much.' After meeting Anne, Sasha is less concerned with her lover's reaction than with the realisation that 'Monique is on Sasha's side', and when her lover chooses an apartment for them to live in, her first thought is 'Monique would love it... Finally he has done something Monique would approve of.' This story works particularly well, perhaps, because it deals primarily with female characters, and throughout this collection, Heiny's women are much sharper, more interesting and more individualised than her men, who share the same fondness for trivia and disappoint their partners with their mundanity. Nevertheless, I loved 'How To Give The Wrong Impression,' first published in The New Yorker back in 1992, which is daringly told in the second person and made me emphasise completely with Gwen, who is in love with her flatmate but cannot admit her feelings. (I disagree with the reviewer in The New York Times that this story is too 'cute' and has a 'darling ending'; the ending seemed to me to be thoroughly ambiguous.)

The other stories in the collection are more of a mixed bag, although I enjoyed reading all of them. The three interlinked stories focusing on Maya and Rhodes as they date, cheat and have a baby are somehow less than the sum of their parts, although at least two of them, the eponymous 'Single, Carefree, Mellow' and 'Dark Matter' are strong individually as well. Part of the problem, I think, is the fact that they're set within a collection of very similar stories, where many of the women are a little like Maya and the men a little like Rhodes, and they could stand better as a novella. The stories that branched away from a close exploration of relationships into a more social observational mode also worked less well for me, as I found much of the detail a little shallow - while stories such as 'Blue Heron Bridge' and 'Cranberry Relish' were amusing, they said little other than that neighbours can be stifling and our heroines can be snobbish, and failed to flesh out the secondary cast. 'Andorra', the final story in the collection, is especially forgettable; having been fully versed in how Heiny's stories work by now, I found it extremely predictable.

Overall, I recommend this collection for those who enjoy small-scale, slightly offbeat short stories about relationships, like Melissa Banks's The Girl's Guide to Hunting and Fishing and The Wonder Spot; it's a fun and easy read that is thought-provoking more often than not.
Posted by Laura Tisdall at 08:00