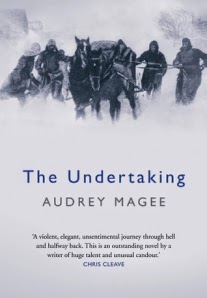 This is a short, disturbing, and in many ways, intensely frustrating novel about a German family in Berlin during the Second World War; both their son, Johannes, and their newly-acquired son-in-law, Peter, are fighting for the Nazis, and Peter ends up starving during the Russian siege of Stalingrad, abandoning any sense of principle in the struggle to survive. In stark contrast, his wife, Katherina, and her parents, under the protection of a doctor high in the Party’s esteem, are moving into a newly-requisitioned apartment, wearing beautiful clothing stolen from Jewish women, and eating chocolate, meat and champagne. The novel is simply narrated from both Peter’s and Katherina’s points of view, told largely through dialogue, and at times, feels more like a sketch within something more complex than a narrative in its own right. This impression is reinforced by our confinement in the world of these characters, with no other voice to speak against the horror of what they are doing; although neither is involved directly in Nazi atrocities against the Jews, apathy is their dominant response to any hint of what is happening, and they know where their newfound wealth has come from, and see the suffering of the poor in the streets. Audrey Magee has made a deliberate choice not to portray a family torn between their desire to survive and their knowledge that what is happening is wrong, and this alone makes The Undertaking a memorable read.

However, I felt uncomfortable with the novel beyond the aspects of it that are clearly meant to make it uncomfortable. The narrative was one key issue. Although I have read a number of novels that make such a skeletal telling of a story not only work but strengthen their telling – How Many Miles to Babylon? springs to mind – I don’t feel that The Undertaking is one of them. There is little sense of layer and nuance to the dialogue other than our sense of the crimes that Peter and Katherina’s world is built on, and none of the characters emerge as fully-dimensional individuals. The narrative pull is such that I did feel invested in the couple and what would happen to them – despite my better judgment – but I had little sense of who they really were as people, apart from their callousness. This sense of characterlessness was strengthened by the curiously flat affect of the way their story is told. While it makes sense for Magee’s purposes that they should distance themselves from others’s suffering, at times they seem scarcely more invested in their own lives. Although Peter’s feelings for Katherina are clearly powerful – even if she becomes more of a symbol to him than a woman – and Katherina’s feelings for Peter and for their son strong, little of this is explored and expressed. In consequence, the ending of the novel feels more like a heaping of events one upon the other, lacking the impact they ought to have, although I did like that we are left wondering how we should react to the pair now and whether their suffering in any way can mitigate their earlier profiteering.

Like A Girl Is A Half-Formed Thing, The Undertaking is the kind of novel I struggle with because I like long stories that delve deep into the inner worlds of their cast, and that is not what The Undertaking is aiming to do. Neverthless, I can’t rate the latter as highly as the former because it seems to me that it’s only trying to pull off one thing – our confused and ambivalent reaction to this family – and while it does this very well, there ought to be more to a novel than eliciting one reaction, however much that reaction makes us think. Like all the shortlisted titles this year (something which has never happened to me before when reading any prize shortlist!) I think it deserved its place on the Baileys longlist, but am unsure whether it was strong enough to be shortlisted, especially above titles such as The Luminaries (yes I am still bitter about its exclusion). A thoughtful and thought-provoking work, but not a stand-out for me, and I’m surprised that it was included on so many shortlist predictions, as well as on the shortlist itself.
Posted by Laura Tisdall at 08:00