The subtleties of the soapbox 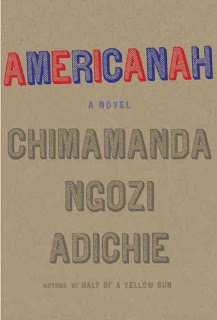 In Chimamanda Ngozi Adichie's story 'Jumping Monkey Hill', which appears in her collection The Thing Around Your Neck (2009), an interaction between a writer on an African writing retreat and the course leader glosses the story as a whole. The course leader, Edward, criticises 'agenda writing' in a particular story, stating that 'the whole thing is implausible... this isn't a real story of real people'. Ujunwa, the author of the story in question, responds to the criticism; the story is real, she tells him, because it is her own story. Ujunwa's riposte could serve as the manifesto for Adichie's newest novel, and in my opinion, her best: Americanah. A similar debate occurs in Americanah, when the main character, Ifemelu, disagrees with a woman in the hairdresser's, Kelsey, about the V.S. Naipaul novel A Bend in the River, which is set in Africa. When Kelsey implies that Ifemelu is unable to read the novel in an unbiased way because of her emotional involvement with the subject - in other words, because she comes from Nigeria - Ifemelu reflects that Kelsey 'somehow believed that she was miraculously neutral in how she read books, while other people read emotionally.' This is a running theme throughout Americanah; elsewhere, Ifemelu makes a similar protest to Ujunwa, arguing that sometimes a message cannot be subtle, because it is true. This controversy over soapboxes in fiction, of course, reflects the wider theme of the novel; black people in America become doubly dispossessed by such arguments, because they are both discriminated against and unable to voice their experiences of discrimination, as their voices are not 'objective'. Reflecting this idea in an exploration of fiction makes it clear how ridiculous it is; what reader, writer or commentator is truly objective?

Nevertheless, I had problems with The Thing Around Your Neck; while I respected Adichie's manifesto - sometimes things are as black and white as they seem, and the truth is more important than adding nuances and question marks for the sake of literary effect - I did not feel it had been successful in practice. The stories that I found most significant in the collection were the ones that did seem nuanced and realistic, as opposed to others like 'A Private Experience', which felt schematic and simplistic. The point is, surely, that a novel does differ from a piece of journalism or a political manifesto; the tools it has available to convince readers are subtler. The reason that Americanah works so well, in short, is that it takes the intensely personal narrative of Adichie's first novel, Purple Hibiscus (2003) and sets it against a social and cultural landscape that is as complex as that of her second, Half of a Yellow Sun (2006), although Americanah, unsurprisingly, is primarily set in the United States rather than Nigeria. Neither of her other novels fully worked for me; this one did. Adichie does have a soapbox to stand on in Americanah, but she pulls this dangerous move off by integrating her message fully into the experiences of her two protagonists, Ifemelu and her one-time boyfriend and first lover, Obinze. On one hand, Americanah is an ultra-modern commentary on race relations; on the other, a very old-fashioned love story where we hope that boy will get girl.

Ifemelu and Obinze are both educated, relatively well-off Nigerians who, like the rest of their classmates, dream of escaping to another country one day to fulfil their aspirations; a gamut of Western countries are of course available, but Obinze in particular is fixated on America. It is Obinze who most vividly expresses the plight of the illegal immigrant who isn't an asylum seeker but, nevertheless, has very valid reasons to emigrate; his fellow guests at a British dinner party 'all understood the fleeing from war, from the kind of poverty that crushed human souls, but they would not understand the need to escape from the oppressive lethargy of choicelessness'. He is 'merely hungry for choice and certainty'. Ifemelu and Obinze's quest for the West takes them along very different paths; Ifemelu is initially the more successful, attending an American university and eventually obtaining a visa when she finds a job in the States, while Obinze's road is rockier as he struggles to survive as an illegal immigrant in Britain. Both, however, are drawn back to Nigeria, their teenage years, and each other. In her exploration of both her protagonists' experiences, Adichie rightly places the question of race at the forefront, and the novel is rich with observed detail, exploring not only the tensions between black and white but between African-Americans and 'American Africans', between blacks and Hispanics, and - in a thread that runs throughout the novel from its opening in a hairdresser's - the small markers of culture such as whether a black woman has 'natural' or 'relaxed' hair. (I did find myself wishing for a little more intersectionality - gender and class are oddly absent from the novel - but it feels ridiculous to criticise Adichie for not covering every type of injustice. Ifemelu's experiences as a black woman, are, however, reduced to dating and hair, and there's little on Obinze's specific struggle in Britain as a black man.)

The other thing Americanah does which I'm usually very wary of in novels is draw explicitly on the author's personal experience (Ifemelu's career trajectory tracks Adichie's fairly closely). Like the question of the soapbox, this is something that Adichie addresses directly in the novel, when African-American writer Shan, the sister of one of Ifemelu's boyfriends, talks about her memoir of growing up black in the States, taking direct issue with the word 'nuance': 'My editor reads the manuscript and says, "I understand that race is important here but we have to make sure the book transcends race, so that it's not just about race." When she includes one of her mother's experiences of racism, 'my editor wants to change it because he says it's not subtle. Like life is always fucking subtle... somehow my mom's experience is suddenly unnuanced. "Nuance" means keep people comfortable'. This obviously speaks to criticisms of 'issue' novels as well as the problems of using personal experience, and the interesting thing is that Adichie portrays Shan's memoir as a flop and Shan herself as overly entitled, surrounding herself with disciples like her adoring brother. It's as if she is recognising the problematic aspects of using personal experience - not because it isn't true, but because what is true in a novel is not always what is believable - and deciding to do it anyway. It is this consciousness of how we can utilise our own experiences to convey what we want to say that makes Adichie's novel work, even if there are a few too many of Ifemelu's blog posts quoted verbatim, which can seem a little lazy when Adichie is so clearly capable of writing show-not-tell interactions.

Like Barbara Kingsolver's Flight Behaviour, then, this novel is not only a brilliant read, but an important one; two qualities that rarely come together, in my experience, although most novels should not be both, and do not try to be. While characters such as Shan take issue with 'subtleties' and 'nuance' when telling real experience, in essence this is what this novel is; something that is both true, and utterly convincing.
Posted by Laura Tisdall at 09:30