Farthest North and Farthest South #4: 'Written so deeply... I can almost taste the ink' 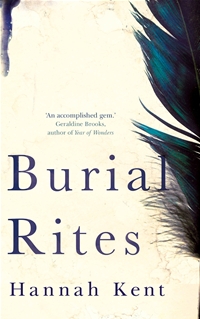 When Hannah Kent's fictional version of the real historical figure, Agnes Magnúsdóttir, a servant woman who was the last person to be executed in Iceland, starts to relate a harrowing story from her childhood, she begins like this: '"Do I remember?... I wish I could forget it." She unhooked her index finger from the thread of wool and brought it to her forehead. "In here," she said, "I can turn to that day as though it were a page in a book. It's written so deeply upon my mind I can almost taste the ink." It is Agnes's various retellings of her thirty-four years of life through this novel that become both its strength and its weakness, and also raise the most difficult questions for any historical novelist who chooses to use actual historical characters. While it's certainly possible to use real figures both ethically and effectively in fiction - Hilary Mantel manages it through the sheer depth of her research and the roundedness of her almost-biographical portrait of Thomas Cromwell, while Gaynor Arnold takes an easier road in Girl in a Blue Dress and After Such Kindness by renaming and reinventing Charles Dickens and Lewis Carroll - it's a hard thing to take on. Similarly, the switch between Agnes's first-person narration, and third-person narration from the points of view of Agnes's wards on the farm where she is being held, and the priest, Tóti, who has been assigned to her case, is technically challenging. There is a sense, in this novel, that Kent has taken on rather more than she can chew - but also evidence that she is already a very accomplished historical writer.

It's in the first-person sections of this novel that Kent's inexperience as a writer shows the most. Alongside beautiful third-person passages and carefully-written dialogue such as the section I've already quoted, much of Agnes's narration, seems, unfortunately, like it emerged from a creative writing class, especially in the melodramatic prologue: 'They said I must die. They said that I stole the breath from men, and now they must steal mine. I imagine, then, that we are all candle flames, greasy-bright, fluttering in the darkness and the howl of the wind, and in the stillness of the room I hear footsteps, awful coming footsteps, coming to blow me out and send my life up away from me in a grey wreath of smoke.' The first-person narration poses problems beyond the stylistic, however. Kent's sympathetic portrayal of Agnes seems to contradict the current historical consensus on her case (though I have barely any knowledge of Icelandic history, and this is taken from Kent's own comments in the epilogue, so I may be wrong) and I felt uncomfortable about her presentation for historical reasons. Furthermore, from a literary point of view, it seemed to me it would have been simply more interesting to present a morally ambiguous heroine constrained by the mindset of her time, rather than a character who is easily accessible to modern readers because she defies convention and is 'strong'. This is a type of story that has been told before - told well, in Margaret Atwood's Alias Grace, and told badly, in Susan Fletcher's Corrag, for example - and I wanted something new from both Kent and Agnes rather than the usual tropes about the horror of Agnes's undeserved fate. In the first-person passages, I found it difficult to sympathise with Agnes or care about what happened to her because she seemed so idealised.

Both these concerns could have been addressed, I think, if Kent had kept to third-person narration throughout the novel, and I say this not only because I think the first-person sections don't work, but because the third-person narrative works so well. It's in these chapters that Kent's abilities as a novelist come to the forefront. She effortlessly manages the difficult balancing act that every historical novelist has to attempt, bringing early nineteenth-century Iceland to life without overloading the story with historical detail, using small oddities such as its unusually high literacy rates and lack of prisons to great effect. The characterisation of the family who shelter Agnes in her last weeks, and of her priest, is sparing but convincing, and even Agnes herself seems to come to life when seen through other people's eyes, or when she narrates her past through dialogue rather than first-person monologue. Avoiding first-person could also have kept Agnes's story more ambiguous, and addressed some of my historical concerns. While this novel is already gripping and memorable, my frustration lay in the fact that I felt it could have been even better, and perhaps this is why this review seems more negative than the novel truly deserves. The ending, in particular, is hauntingly vivid, and on the strength of that alone, I'll be waiting for Hannah Kent's next book.
Posted by Laura Tisdall at 13:16