'We'd never seen anything like that around our place before' 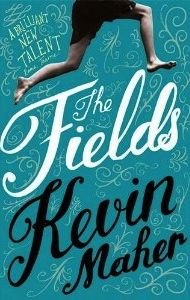 This debut novel has been praised for its original voice, laugh-out-loud humour and brave take on a difficult subject, and to an extent, this is all true. Indeed, the first third of this novel absorbed me completely, although having heard a section of it read out in Kevin Maher's lovely Irish accent when he spoke at Cambridge Wordfest helped, especially with the pronunciation of some of the characters' names. For these reasons, it seems unfair to judge it harshly, yet I'm afraid I felt that the plot lost me after the two-thirds mark. Maher mentioned in his interview at Wordfest that he wrote the first sixty or so pages long before the rest of the novel, and then wrote at least two different versions before finally writing this one, and I think it shows; while he sustains the brilliance of the first sixty manuscript pages (I'm not completely sure what that equates to in printed pages) for much of the novel, the story feels unfocused and unstructured as a whole, as if he never knew quite where he was going.

Jim Finnegan, our narrator, is a thirteen-year-old Irish boy growing up in a family of five older sisters, hanging out with his mates Gary and Mozzo, and entertaining a series of crushes on older girls such as the gorgeous Saidhbh. However, when he attracts the attentions of predatory priest Father O'Culigeen, his life will never be the same again. Jim's descriptions of his abuse, which begins very early on in the novel, are all the more heartbreaking because he so casually weaves the incidents into his reports of the rest of his life, and the reader gets the impression that he will not realise the full impact of his experiences until he is much older, despite his panic attacks and his increasing withdrawal from boisterous family life. His daily life at home and school, however, marks a hilarious contrast to the horror of Father O'Culigeen's attacks, with his mother, father, and sisters Sarah, Siobhan, Fiona, Claire and Susan all distinctive and entertaining characters, and their family dynamic and familiar rituals beautifully drawn, such as battles over the radio and jokes about saying grace at meals. Maher is also brilliant on the details of 1980s culture, and while I'm just a little too young to remember this decade, I'm sure many will find this novel incredibly resonant. Much as I'm usually loath to praise the 'voice' of a narrator, as well, Maher manages to avoid gimmicks and cheap laughs and makes Jim a genuinely likeable boy, which of course makes what happens to him even harder to read.

While it retains the Dublin setting, close-knit cast of characters, and threatening antagonist, therefore, this novel works. It begins to fall apart after the arrival of Jim's Auntie Grace, whom I thought was a bit of a deus ex machina. Without giving too much away, the section of the plot that she introduces feels contrived, unbelievable and dull. At nearly four hundred pages, this book is simply too long, and yet ironically, the resolutions of the three principal storylines - Jim's abuse by Father O'Culigeen, his relationship with Saidhbh, and his dad's illness - feel rushed, especially the latter. The ending of the novel is so unconvincing that I'm still wondering if Jim was having a vision or dream, which seems possible, but is not satisfying in its current form. Its length also means that Jim's humour becomes rather tiresome, whereas cutting a hundred pages or so would probably help it to retain its freshness.

Because of the brilliance of the first two-thirds of this novel, I might still recommend it - but be prepared for disappointment.
Posted by Laura Tisdall at 08:43