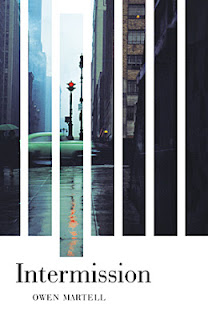 I'm a fan of both Marilynne Robinson and Paul Harding - I loved Robinson's Housekeeping, Home, and Gilead, and Harding's Tinkers - so the comparisons made between their work and this novel encouraged me to read it. Unfortunately, I feel this suggestion was misleading; Owen Martell simply isn't as good a writer as Harding or (especially) Robinson.

The novel focuses on 1960s jazz musician Bill Evans, his parents, Mary and Harry, and brother Harry Jr, in the aftermath of the death of another musician from the Bill Evans Trio, Scott LaFaro. Told in four parts from the third-person point of view of each of these four characters, it emphasises Bill's isolation and disconnection from the rest of his family. On the whole, it is competently written, although Martell's command of imagery can be patchy, ranging from the strangely workable to convoluted and over-wordy. This is particularly noticeable in Bill's section, which closes the novel. It opens with Bill on a plane flying back to New York, and a splendid description of the skyscrapers: 'even the Empire State Building is no more than a pine in the island forest. Bill tries to bring to mind the view in reverse, when he stops in the street and tilts back his head for the metal trunks to communicate down from the heavens rather than up into man's ambition.' It moves onto another image that doesn't quite work: as the plane is landing, 'he has a feeling for the transubstantiation by which he will have been made, before dark, to walk again in the city's cadence.' I see what Martell is getting at here, but I feel that 'transubstantiation' conjures up the wrong set of associations for this translation between one world and another. The passage ends with writing that is even worse, however: 'As they come out of the dive, the cabin fills by degrees with the red augur of evening. It splurges first on the plastic roof then on seat-backs and trays... This particular tint has about it the lucency of skin'. I think this description is overwritten, and over-padded with long words; alongside the rest of the paragraph, it makes even the good sentences function more awkwardly.

Oddly, Harry Jr and Mary's sections suffer from a different problem, although at least this shows that Martell is paying attention to voice. Both are written so simply that they seem rather flat, and I found it difficult to connect to either of these characters. There is the occasional touch of dry, observational humour in Harry's narrative that leavens it slightly - for example, 'The breeze caught a lock of his hair, those loose strands that decided every morning which side of his parting they'd register their allegiance to' - but this isn't enough to save it. By far the strongest section is Harry Sr, and I felt Martell's identification with his Welsh connections really shone through here. Nevertheless, the novel as a whole suffers from a lack of movement. I'm not particularly keen on plot-focused novels, but while a book like Gilead, outwardly uneventful, travels a great deal of emotional distance, I didn't feel that Intermission went anywhere - indeed, everything seems to be the same at the end of this novel as at the beginning. Perhaps this is the point, as the title seems to indicate - but in that case, I think this might have worked better as a short story, given that it is already virtually a novella. 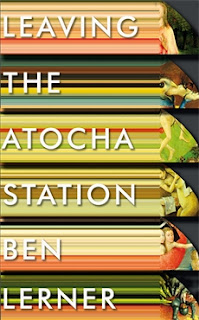 For those disappointed by this, it might be a good idea to turn to Ben Lerner's Leaving the Atocha Station, another recent, slender novel which deals with a rootless young man. Adam is an American poet who has secured a writing fellowship to spend a year in Madrid, where he claims to be working on 'a long, research-driven poem exploring the [Spanish Civil] war's literary legacy' but is in fact doing nothing of the kind.. His 'creative' process is cyclical, meaningless and possibly closer to plagiarism: 'On these days I worked on what I called translation. I opened the Lorca more or less at random, transcribed the English recto onto a page of my first notebook, and began to make changes, replacing a word with whatever I first associated with it... Or I looked up a Spanish word for the English word I wanted to replace, and then replaced that word with an English word that approximated its sound ("Under the arc of the sky" became "Under the arc of the cielo" which became "Under the arc of the cello.")' This Babelfish approach to poetry, however, doesn't prevent Adam from securing positive critical attention and a measure of fame in Madrid, a seemingly inevitable result that reflects the novel's wider concern with false appearance and mistranslation. Adam's games with Spanish reflect his initial difficulties at making conversation in another language, where he is continually guessing at what the other person is saying, and also, it seems, allow him greater freedom to lie then he would have had in his native tongue, as when he pretends that his mother is dead to get the attention of an attractive woman. (Although I speak Spanish very badly, I recognised the confidence that another language can bring you; there's a kind of anonymity in words that aren't your own, and Lerner captures this phenomenon well).

Although Adam's emotional distance from the world around him, fuelled by drink and drugs, is initially fascinating, I felt that I wanted something more from Leaving the Atocha Station than these reasonably familiar musings on the role of art in life, even if Lerner explores the idea far more originally than most writers could manage. Fortunately, the book delivers. For me, the centrepiece of this novel was when Adam is chatting online to an old friend, Cyrus, who is currently travelling in Mexico, and Cyrus tells him a story. He and his girlfriend, Jane, encountered a group of young people swimming in a river, with one girl refusing to swim: 'One of the men, his girlfriend was on the bank... and he was trying to convince her to get in, to swim.' Jane jumped into the river, and began to try and persuade Cyrus to join her; after he did so, the 'girlfriend' yielded to the pressure and got into the river as well: 'things got very bad very fast. she went underwater for a second, and when she resurfaced, she was a little farther down and totally panicked'. As Cyrus's story unfolds - related brilliantly by Lerner within the constraints of instant messaging - Adam is gripped and engaged for the first time in the novel. It's entirely predictable that he later appropriates Cyrus's story as his own, but what this long set-piece does, positioned as it is near the middle of the novel, is emphasise that real things do still happen, that actions have consequences, however far Adam sinks into his ennui. Hence, it functions as a set-up for the violent events later in the novel, which Adam doesn't witness directly.

Therefore, although this novel deals with our distance from reality, it manages to stay grounded - and this was one of the main reasons, alongside the far superior writing, that I preferred Leaving the Atocha Station to Intermission. As this is Ben Lerner's debut, I look forward to seeing what he writes next.
Posted by Laura Tisdall at 09:59