Two (brief) reviews for the price of one! 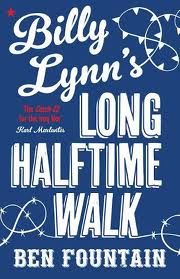 Nineteen-year-old Billy Lynn and his squad, the Bravos, have returned as national heroes from active duty in Iraq. As they tour the US, everybody wants a piece of them – ironically, preventing them from fulfilling another cherished American image and spending more time with their families before returning to war. This novel covers a day in Billy’s life as he and the Bravos attend a Dallas Cowboys football game, form part of the entertainment at half-time, chat up cheerleaders, drink whiskey and coke and try to sell the rights to their stories to a major Hollywood producer. In this surreal pause in Billy’s life before he returns to combat, he is given the chance to reflect on the disconnect between his own experiences and the way the American public sees him.

Billy is an instantly sympathetic character, and it is through his eyes that Ben Fountain is able to convey the sheer weirdness of a certain type of American world-view. The comparison that most obviously strikes the reader is the contrast between the lower-class, badly paid, struggling soldiers, and the pampered, wealthy football players, who play out a mock type of battle without ever actually risking their lives. There’s also the Hollywood version of war that the producer is trying to promote through his fictionalisation of the Bravos’ story. However, through a couple of stylistic tricks that are never overused, Fountain conveys the impact of this experience on Billy. When fans bombard him with meaningless works like ‘nina leven’ and ‘curraj’, they scatter around the page like formless poetry. Billy isn’t stupid – indeed, his thought processes are, if anything, almost too complex and all-encompassing to be believable – but he’s simply unable to digest these crazy experiences.

If there are flaws in this novel, they’re Fountain’s choice to make Billy a conscript through his tangles with the law, rather than tackling the more difficult prospect of exploring the mind of a soldier who freely chose to go to war, and his tendency to focus so strongly on the ideological point he wants to make that he forgets everything else. However, this is a slight niggle, and in all other respects this is an excellent book – Billy’s grief over his dead comrade, Shroom, the characters of the other Bravos, especially Dime, and the scenes with his family are all well-written. I’m now keen to read more of Fountain’s work.

This brief novel is, on the whole, absorbing and beautifully observed. Set in the 1950s in an isolated Australian settlement, we follow the lives of Harry, a dairy farmer, Betty, who cares for a group of old men at a home for the elderly, and Betty's two children, adolescent Michael and the rapidly maturing 'Little Hazel'. Certain passages are exceptionally written; Harry's observations of his cows, or his fanciful daydream that they are a dance troupe that he must control, or Hazel's fears of being pecked on the head by a magpie, and her other notes on nature. However, Betty's relationship with the old men she looks after leads to some of the most touching scenes in the novel, especially when she pretends to exit the home and comes back in with handbag and coat as a visiting 'wife' for several of those whose minds are wandering. This novel is earthy and unflinching in its descriptions of sex and sexual desire, but these never felt gratuitous to me, except for the letters that Harry writes to Michael. These, I felt, should have been omitted; they were not only inappropriate, but deeply misogynistic in places, and accurate as this might have been as a depiction of the mindset of a provincial 1950s farmer, Carrie Tiffany did not explore this strand thoroughly enough to allow me to retain sympathy with Harry's character, which was a shame. Another addition to the novel that seemed to carry little weight was Harry's poems about the kookaburra family that he observes throughout the year; these dragged, were largely uninspired, and either paralleled the novel's plot too obviously or seemed to have little to do with the rest of the story at all. And because these poems took up so much space, we are left with something that feels more like notes for an excellent novel than the novel itself. However, Tiffany is clearly a very talented writer, and I'd like to read more of her work.

I've also just finished Fieldwork by Mischa Berlinski - which was so brilliant I may have to wait some time to review it. I'm highly disappointed that it's currently his only novel...
Posted by Laura Tisdall at 18:46