'Tell me your story' 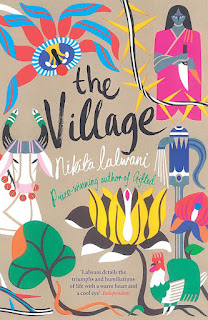 It is difficult to warm to this excellent novel, but this is really a proof of its success. It’s genuinely disturbing, not in the ‘horror film’ sense, but because it disturbs the reader’s settled pre-conceptions and leaves you not quite knowing where to settle them again. Ray, Nathan and Serena are the three members of a BBC production crew who have come to India to make a documentary about life in a ‘prison village’, a rehabilitative experiment where prisoners who have behaved well during their first years in jail are allowed to live under controlled conditions with their families while they serve out the rest of their sentences. Ray, the central character, straddles these two worlds uneasily – from North India originally, she speaks fluent Hindi and refers to herself as ‘veg’, a shorthand for religious and clean-living – but actually, although she can’t quite accept this, has much more in common with the other privileged Westerners.

As the documentary is filmed, the theme of voyeurism becomes so strong that it almost seems a little laboured. Ray is continually imagining scenes in terms of camera angles or close-ups, or actually taking random shots through her viewfinder. And Lalwani does not only focus on the visual element of filmmaking – dialogue is also key. Ray is aware of the mistranslations that are fed to Serena and Nathan, but despite being able to speak to the villagers directly, she is constantly aware that she’s not really sure what they are saying. At one point, acting as translator for Nathan when he interviews a village boy, she alters both sides of the conversation as if she is editing a tape, re-imagining what Nathan ought to have asked and what the boy ought to have said. Although this works well in demonstrating the increasingly shaky morality of what the documentary crew are doing, I felt that the dubiousness of their work perhaps shouldn’t have been so obvious from the start. A more gradual realisation might have brought the point home even more strongly, and the fact that Nathan, Serena and even Ray are all so unsympathetic doesn’t help.

Despite this slight flaw, Lalwani does a masterly job at dissecting Ray’s character even as Ray tries to dissect those around her and find out ‘their true stories’, demonstrating her lack of self-knowledge. Ray distances herself from the other two film-makers throughout most of the novel by protesting that she has nobler motives, that she wants to show a UK audience that India can be forward-thinking in terms of justice and highlight the suffering endured by some of the prisoners in their previous lives, but it is evident she is fooling herself when she thinks she would like to be able to secretly film her subjects through special glasses (banned because of the ethical questions they raise). Ultimately, Ray demands truth from the villagers but lies to them about who she really is. While complaining that they are putting on a show for the cameras and aren’t being ‘natural’, she fails to see that she is putting on a show for them; trying to fit in with what they expect her to be even though she has rejected this ideal in her English life.

Though uncompromisingly bleak, this thought-provoking novel is genuinely gripping and all too brief. And if you enjoyed Lalwani’s take on how we present and reimagine ourselves to suit others, I would recommend Jennifer Egan’s Look At Me, which deals with similar themes in a very different context.