4. 'You don't deserve the gift of mercy' 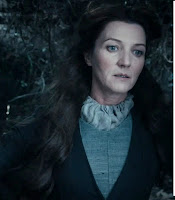 [Spoilers through A Dance with Dragons.]
On the other hand, justice and vengeance are predominantly associated with Catelyn and Arya. Catelyn’s relationship with the concept of justice is fascinating; in general, before she becomes Lady Stoneheart, she supports Ned’s idea of justice, and continually emphasises the importance of differentiating it from vengeance. Unlike Ned, however, she supports justice for pragmatic, rather than honourable reasons, recognising the essential futility of vengeance. When Edmure tells her “the Lannisters will pay, I swear it, you will have your vengeance,” after Ned’s execution, she asks him“Will that bring Ned back to me?” [GOT, 787]. She has similar exchanges with both Stannis and Renly in Clash:
[Renly] “My lady, I swear to you, I will see that the Lannisters answer for your husband’s murder,” the king [Renly] declared. “When I take King’s Landing, I’ll send you Cersei’s head.”
And will that bring my Ned back to me? she thought. “It will be enough to know that justice has been done, my lord.” [COK, 253]
[Stannis] “Still, I give you my word, you shall have justice for his murder.” How they loved to promise heads, these men who would be king. “Your brother promised me the same. But if truth be told, I would sooner have my daughters back, and leave justice to the gods.” [COK, 346]
She explains herself to Karstark with similar rationality when he tells her, that, by releasing Jaime, “You have robbed me of my vengeance”, noting that “Lord Rickard, the Kingslayer’s dying would not have bought life for your children. His living may buy life for mine.” [SOS, 191]
Catelyn also has two monologues on the foolishness of revenge that I think are two of the most powerful monologues in the series. Firstly, when Lord Karstark tells her that “You are the gentle sex... A man has a need for vengeance”, Catelyn replies “Give me Cersei Lannister, Lord Karstark, and you would see how gentle a woman can be... Perhaps I do not understand tactics and strategy... but I understand futility... I will mourn for Ned until the end of my days, but I must think of the living. I want my daughters back, and the queen holds them still. If I must trade our four Lannisters for their two Starks, I will call that a bargain and thank the gods. I want you safe, Robb, ruling at Winterfell from your father’s seat. I want you to live your life, to kiss a girl and wed a woman and father a son. I want to write an end to this. I want to go home, my lords, and weep for my husband.’ [GOT, 795]
Heartbreakingly, when she gives this monologue again, to her dying father, her list of ‘wants’ has moved from being a list of hopes to a list of losses, as she recognises what she cannot have and the ultimate failure of her earlier arguments: ‘Robb must fight the Greyjoys now as well as the Lannisters, and for what? For a gold hat and an iron chair? Surely the land has bled enough. I want my girls back, I want Robb to lay down his sword and pick some homely daughter of Walder Frey to make him happy and give him sons. I want Bran and Rickon back, I want...” Catelyn hung her head. “I want.”... Midnight has come, father, she thought, and I must do my duty. She let go of his hand. [COK, 576]
However, this second monologue is not merely Cat’s acceptance of her fate, as, of course, the ‘duty’ she tells Hoster she has to do is releasing Jaime. Indeed, her repetition of the same points becomes a justification for finally acting impulsively, for transgressing social norms and not doing the ‘duty’ that men have told her she must do, but taking the path forwards that she can see most clearly. And, as her first monologue indicated (‘Give me Cersei...’), Catelyn, unlike Ned, is not immune to the emotional attractions of vengeance, although she keeps herself under tight control. The reader is clearly meant to think that she might be intending to kill Jaime, not releasing him, and that is consistent with her previous thoughts of revenge. She tells Brienne: “I have no skill with swords, but that does not mean I do not dream of riding to King’s Landing and wrapping my hands around Cersei Lannister’s white throat and squeezing until her face turns black”, giving Brienne permission to take her revenge on Stannis, although Cat knows by this point that he has the lawful claim to the throne [COK, 410-11]. She tells Robb that his ‘first duty’ is ‘to defend your own people, win back Winterfell, and hang Theon in a crow’s cage to die slowly’, conflating duty and vengeance [SOS, 200]. Most strikingly, she reflects to Brienne after hearing of Bran and Rickon’s deaths, ‘Ned always said that the man who passes the sentence should swing the blade, though he never took any joy in the duty. But I would, oh yes.’ [COK, 574] 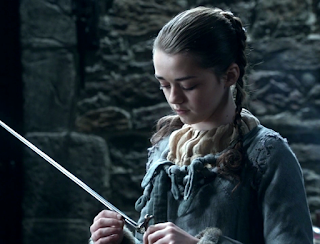 The ideas of justice, vengeance and mercy also seem crucial in Arya’s arc. Arya is a staunch defender of the innocent and weak, but her fierce belief in justice seems to exclude the possibility of her being truly merciful. For example, when she gives water to Stark men hanging in crow cages, she is keen to establish first that they are Robb’s men and deserve her help, although a truly merciful action would have been to give them water regardless, as they are dying [SOS, 397-8]. Like Sansa, Arya is involved in numerous trials, where she is often furious when justice is not done; she shouts ‘Liar!’ at Sansa’s unclear testimony, and is angry that the Brotherhood without Banners does not execute the Hound. This, however, is a score that she is able to settle, when she tells him: “You don’t deserve the gift of mercy... You shouldn’t have hit me with an axe... You should have saved my mother.” [SOS, 1038]. Arya’s concern for justice leads her to desperately seek a reason to murder the old man in Dance (‘He has lived too long... He has no courtesy... His face is hard and mean... He is an evil man... and he has a villain’s beard’) whereas the point of her training is that ‘it is not for you to judge him.’ She wants the kind of personal connection with her victim that Ned strove for, albeit in a twisted way: ‘When I kill him, he will look in my eyes and thank me’, but the kindly man is not interested in Stark justice: ‘It would be best if he took no note of you at all.’ [DWD, 837-8] Throughout Dance, the kindly man seems to be trying to tell Arya that she is no longer involved in the kind of ‘Stark of Winterfell’ justice that led her to murder Dareon, and that she has to put this aside if she is to join the Faceless Men and give ‘the gift of death’, which sounds akin to ‘the gift of mercy’ she denied the Hound.
While, as we have seen, Sansa is associated with mercy and pity, Catelyn is far more akin to Arya in this respect. When she pleads for peace, her reasons are pragmatic – saving her family – rather than truly forgiving. As Lady Stoneheart, she is also known as ‘Mother Merciless’, and while an argument can be made that her trials are fair, they are hardly merciful. Overall, Catelyn’s greater affinity with Arya may explain why, although both girls want to take their mother’s name as an alias when they go into hiding, it is only Arya who is allowed to retain it. And for Arya, ‘Cat’ is clearly not just a means to an end – as ‘Nan’, ‘Arry’ and ‘Squab’ were – but a valued identity. She uses ‘Cat’ to keep up her spirits during her isolation in Braavos, telling herself ‘I am a cat now, not a wolf. I am Cat of the Canals.’ [FFC, 627] and ‘Cats never weep, she told herself, no more than wolves do.’ [FFC, 628]. This second statement indicates that, unlike, for example, the mouse-like Nan, ‘Cat’ is an identity that Arya can reconcile with her Stark self, although she is different from the true Arya Stark. In contrast, Sansa plays Alayne Stone, who diverges ever further from the inward Sansa; even her physical resemblance to Catelyn is reduced when she dyes her hair.
Posted by Laura Tisdall at 08:33