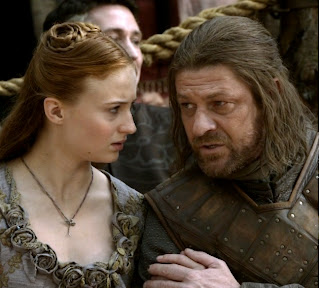 [Spoilers through A Feast for Crows]

To extend this discussion more broadly, I’m going to consider the themes of honour and mercy, on one hand, and justice and vengeance, on the other. Honour and mercy are predominantly associated with one character in A Song of Ice and Fire – Ned Stark – and for good reason. The most succinct statement of Ned’s philosophy and of its limitations comes when he rejects Littlefinger’s offer of help after Robert’s death: ‘He drew the dagger and laid it on the table between them; a length of dragonbone and Valyrian steel, as sharp as the difference between right and wrong, between true and false, between life and death.’ [GOT, 512-13]. Renly remembers, “he would not listen and he would not bend.” [COK, 257]. Sansa remembers that ‘My father always told the truth.’ [SOS, 85]. Robert’s desire for revenge on Rhaegar Targaryen is puzzling and disconcerting to Ned: ‘he found himself recalling Rhaegar Targaryen. Fifteen years dead, yet Robert hates him as much as ever. It was a disturbing notion...’ [GOT, 356]. He refuses to send assassins after Dany [GOT, 353-4] or to reject Stannis’s legitimate claim to the throne [GOT 635]. As this evidence suggests, honour and mercy, for Ned, go hand in hand with justice. He perceives no relationship between justice and vengeance, as he demonstrates in his discussion with Ser Loras: “Vengeance?... I thought we were speaking of justice. Burning Clegane’s fields and slaughtering his people will not restore the king’s peace, only your injured pride.” [GOT, 469]. Later in the same scene, he tells him that “we are about justice here, and what you seek is vengeance.” [GOT, 470]

Like Ned, Sansa is predominantly associated with mercy, yet her empathy and compassion are even more marked. We see her singing ‘Gentle Mother, font of mercy... teach us all a kinder way’ [COK, 595] and comforting the women in the Red Keep during the Battle of the Blackwater. She speaks kindly to Ser Lancel, a Lannister and her enemy, in Storm, and is one of the few people in King’s Landing to have any sympathy for Lollys. Before Marillion’s trial, where she bears false witness against him to save her own life, she has to tell herself ‘I must not pity him’ [FFC, 183], reminding herself that he tried to rape her and also stood by while Lysa threatened to murder her. Unlike Ned and Arya, however, she does not seem overly concerned with justice, possessing a more flexible definition of fairness, and indeed she is involved in at least two unjust trials (Joffrey/Lady, Marillion, and if her status as a key, if absent, witness in Tyrion’s trial is counted, a third). By definition, courtesy and kindness does not always involve telling the truth, as Sansa recognises when she thinks ‘A lie is not so bad if it is kindly meant’ [FFC, 182], but Sansa’s willingness to see the truth as a malleable instrument, rather than Ned’s image of it as an inflexible dagger, may yet lead her into danger.
Posted by Laura Tisdall at 08:38