Tuesday Musings: Should we have GCSE 'set texts' at all? or, goodbye, Michael Gove 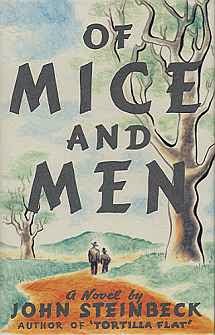 The departure of Michael Gove from the Department of Education has prompted another flare-up of complaints about, to my mind, one of the least offensive things he did during his tenure: swapped one set of arbitarily-selected GCSE set texts for another arbitrarily-selected set. I'm no fan of Gove, but he is right to say that he has not 'banned' any books by doing this, unless we think that all of world literature was 'banned' from the previous GCSE syllabus bar the handful of texts that made their way onto it. It's also odd that the attacks have been focused on proving the literary merit of the excluded titles, such as Of Mice and Men. Again, many previously excluded titles also had literary merit, so Of Mice and Men is not being deemed unliterary by its omission. Most pernicious, however, is the idea that Gove's syllabus somehow discriminates against working-class children. A recent petition directed at Nicky Morgan, the new education secretary, states that 'you won't find many 15 year olds who will easily connect with Dickens and Shakespeare… most are alienated by the culture, the characters and the language.' The conclusion is that 'this is a syllabus that privileges the elite and deprives the disadvantaged'. While I agree we should be suspicious of Gove's Anglocentrism, I think it is equally offensive to suggest that working-class children are not capable of appreciating the texts on his syllabus. English literature is taught in schools to stretch pupils' horizons and expand their imaginations, and, in my opinion, it is an awful thing to suggest that non-elite children don't have imaginative capacity, or that a good teacher can't teach a difficult text to a less academic class. This is not a good reason to oppose Gove.

When a range of writers were asked by the Guardian to pick GCSE set texts, Hilary Mantel gave the only right response: 'Should we play the Gove game, by setting up opposing lists? Or should we ask, which Gradgrind thought up the idea of set texts in the first place? Why should students be condemned to thrash to death a novel or a corpus of poetry, week after week, month after month?' Opposing Gove does not mean coming up with another handful of texts, or fighting for a return to the (bad) status quo, but by returning the choice of texts to teach to those who have to teach them. The author of the petition I cited above claims that teaching Dickens or Shakespeare to fifteen-year-olds is too difficult; other teachers would not agree. Giving teachers the choice of texts would avoid the tokenism, box-ticking and so forth that goes on at the moment (ethnic minority writers suffer particularly badly, as to a lesser extent, do women) and allow them to teach texts that appeal to them and to their class. The National Curriculum (b. 1988) is, after all, a relatively recent invention, and ultimately micro-management does not encourage teachers to work at their best. This doesn't mean there can't be broad national guidelines suggesting that teachers should teach a novel and a play, for example; but these would be much more flexible than what is currently on offer. It would also avoid the pointless squabbling about what texts are valuable or representative, a choice that no individual can make adequately.

Gove has departed from education, but it seems unlikely that much will change unless we radically rethink the way schools are run; harmful changes were set in motion long before he entered office. Sadly, this is no time for celebration.
Posted by Laura Tisdall at 14:34