'I don't know how one could ever forget a house like this'...? 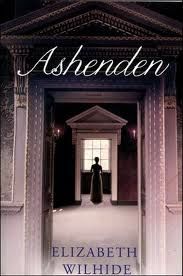 This is a difficult book to review. Although the linked short stories that make up the narrative are often precise, memorable and compelling, there's also some rather dull writing and characterisation; perhaps unfairly, I can already sense that this novel will be forgettable, despite its many strengths.

In this book, Elizabeth Wilhide presents a series of vignettes from Ashenden's past, beginning in the eighteenth century and moving full-circle to the present day, which occasionally share common characters, but otherwise are connected by nothing except the house. I felt that this would have worked well enough as a series of short stories, and it is the clumsy attempts to connect them more closely that are the most serious weaknesses of this novel. Most of the stories begin with a 'linking paragraph' that jumps out from the otherwise spare and well-written prose by labouring the obvious with overblown descriptions: for example, in 1929, 'It's a simple equation: spend more than you earn, no matter how little or how much that is, and there's trouble sooner or later... Trapped in the looking glasses here and there are pale reflections that rise up out of their depths and fade away again.' I swiftly began skipping these paragraphs, and the stories would be improved at a stroke by cutting them all. More trivially, I did not get much sense of what the house was like, despite the frequent references to architectural detail like the clerestory windows, and I felt, for this reason, that much of the description was wasted.

However, if you don't think of this book as a whole, but treat each story in turn, there's much to enjoy here. I found that the early and late chapters dragged, but the middle section introduces set after set of interesting characters and well-observed, inventive, situations. At times, these were too briefly explored, as in 'The Treasure Hunt', but at other times, the brevity of the story is its strength, as in 'The Boating Party' and 'The Photograph.' The links to historical events are usually deftly explored, taking an unusual angle rather than making the obvious links that lesser historical novels (and Downton Abbey!) usually go for, especially in the sections set in 1909, 1916 and 1946, exploring the two world wars, their beginnings, and their aftermath. Certain characters are instantly engaging, despite there being very little space to place them on the page, the mark of a skilful writer; I longed to find out what had happened to Pudge from 'Love in Bloom' and Frances from 'The Treasure Hunt'. On the other hand, however, I did find myself wondering if Wilhide is simply a better writer of short stories than she is a novelist - two very different arts - for when characters did appear in more than one story, like Reggie and Hugo in the twentieth century, or James Woods in the eighteenth, I found myself losing interest in them. Again, this suggested that the parts were stronger than the whole; I wasn't sure if Wilhide had anything to say, overall, about home, place, and belonging, although she explores other themes so well in microcosm.

This book was well-written, interesting, and well-researched, but ultimately, for me, failed to come together. Because of this, it sits uncomfortably in the shadow of stronger country-house novels such as Atonement and The Little Stranger, and could be unfavourably compared to Sebastian Faulks's recent A Possible Life, which achieves a unity of theme across much more disparate stories, and manages to work as a whole. It's certainly worth reading, but I don't think it's a book that I will remember.
Posted by Laura Tisdall at 15:43