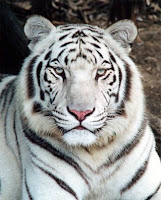 Back to my tigers theme - although The White Tiger by Aravind Adiga, Booker winner in 2008, is actually tigerless. The White Tiger of the title is the way our narrator thinks of himself, a once-in-a-generation entrepreneur who has risen from poverty in rural India to business success in Bangalore. This is a great page-turner, and the narrative voice is what makes it. Balram Halwai, our narrator, fully establishes his own particular way of looking at his country as he writes a series of letters to the Chinese premier, Wen Jiabao, who is about to pay a state visit. Balram fears that the premier will only see one side of India, and wants to introduce him to the side he sees - the exploitation, poverty, and misery of the 'Darkness' in which the majority of the population live.

This has obvious potential to become worthy and heavy - another Fine Balance (Rohinton Mistry, and a novel that I seem to be alone in my dislike for. Anyone else?) but Balram's narrative simply sweeps such concerns aside. He's persistently likeable, despite the fact that he tells us almost immediately that he has murdered his boss, capable of both surprising generosity and shocking contempt for others. And yet... I finished this novel today at full pace and wished for both more pages, and more depth. The ending felt extremely rushed, and I'm beginning to suspect that Adiga simply writes so well that it conceals the fact that there isn't as much substance here as there could be. I certainly wouldn't let most writers off for portraying most of their characters as broad stereotypes (dominating family matriarch, greedy landlords etc). And yet I can't help but recommend it.

PS: (Has anybody read his second novel/collection of short stories, Between the Assassinations? I've just been sent a proof copy of his latest novel, Man In Tower, and am very much looking forward to it, but the lukewarm reviews put me off the previous book).