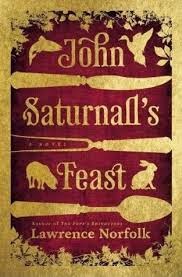 When John's mother is suspected of witchcraft, she and her son are chased away from the small village where they live and forced to live wild in the woods. As they survive on chestnuts, berries, and what little game they can catch, she tells the boy about a complicated and delicious feast that is the birthright of those who live in the Vale. After his mother's death, John is taken on at the kitchens of the local manor, and soon begins to learn how to make food beyond his wildest dreams. But when his apprenticeship is interrupted by the English Civil War, and he is once again short of food, images of the promised feast return to him, alongside a longing for a woman whom he can never have. John Saturnall's Feast is a very endearing novel; although it gets off to a rather slow start, once John reaches the kitchens it rockets along, swallowing up years of his life in a few pages. I genuinely enjoyed reading his story, and inhabiting the world of complex below-stairs hierarchies, fiendishly-difficult recipes, and flirtations that Norfolk conjures. However - and perhaps because this novel took twelve years to write - you can too easily see the joins beneath the surface. While some chapters, scenes or sections feel fully-realised - the exuberance of John's early days in the kitchen, the horror of his experience at the Battle of Naseby, or his first encounter with his lover - others feel sketched in to fill in a gap, or to move the book along its very lengthy time-scale.

The handling of time, while a minor issue, summed up the problem with John Saturnall's Feast for me. The novel spans a period of more than thirty years - from 1632 to well after the Restoration - but Norfolk does not handle these time skips confidently enough for the reader to get a sense of time passing. When Cromwell was suddenly dead, for example, I felt totally disorientated, having thought we were still in the early 1650s. It struck me that for a reader who does not have a close working knowledge of the timeline of Charles I's reign, the civil wars, interregnum and Restoration, this novel would be even more confusing, as it rarely cites dates. Furthermore, Norfolk seems to forget that his characters will age past young adulthood. Gemma, a maid who was at least ten in 1632, is still being described as 'a young woman' in 1660 (clunkily and repetitively as well), even though she would surely be thirty-eight by that point, and not really 'young', especially by early modern standards. Similarly, Lady Lucretia, heiress to the manor, has only 'a few lines' on her forehead when she must be in her forties, even though John's hair is greying, and they are presented as being the same age. This might seem nitpicky, but it contributes to a general sense that you are all at sea with time in this book. The story feels as if it has been telescoped across a much longer timeline than it was written for, as if, in the Vale, time does not pass, while in the outside world it does.

Ironically, though, this fairy-tale chronology, if done a little more confidently, could have worked with the general feel of the novel, for John Saturnall's Feast, despite its close ties to well-known historical events, is not really a historical novel. It plays fast and loose with historical detail, not least the attitudes of the time - John is mixed-race, but nobody ever comments on the fact or demonstrates any especial prejudice towards him, and his love affair with the lady of the manor seems to largely be problematic because she is engaged to somebody else, although there are a few throwaway references to the idea that she can't marry 'a kitchen boy'. (Once again, we have the unconvincing suggestion that the English Civil War was the foundation of class equality...) Reading this novel as if it were a historical fantasy or even a children's book is much more satisfying, allowing you the chance to appreciate its strengths while minimising its weaknesses. To an extent, I liked the ramshackle feel of the story, the way in which characters were wheeled on and off stage as if they were puppets, the obvious interventions of the author in the narrative to create suspense or drama. It's good storytelling, if not great literature, and I was absorbed by it. It isn't a novel I would have read if Mr B's hadn't sent it as part of my Reading Year, but, despite its flaws, I'm glad I did.
Posted by Laura Tisdall at 08:13