For the 2011 line-up, click here. In no particular order (and with the obvious caveat that these are books read by me for the first time in 2012, not published in 2012):

1. The Tiger's Wife by Tea Obreht

I reviewed this in detail here. Summary: I liked it very much once I realised it was not about a boy meeting a magical tiger. I have been told that Yann Martel's Life of Pi (which I have also avoided for some time) is, similarly, not about a magical tiger floating on a raft, so perhaps that's one to add to my ongoing Tigers series. (I like tigers, as long as they aren't magical ones, as you may have surmised...)

I've also reviewed this on the blog. Possibly the finest work of nature writing I have ever read, a beautiful collection of essays, and a trove of interesting information to spark new hobbies (for me, the opening essay, 'Aurora', rekindled my long-dormant interest in the far north). I've since read her first collection, Findings, and didn't think it was as good - but then, very little is.

3. The Dust Diaries by Owen Sheers

Shamefully, I did not review this wonderful memoir immediately, although it made a deep impression on me when I read it. Owen Sheers narrates the life of his great-uncle, Arthur Cripps, a missionary to Southern Rhodesia (now Zimbabwe) his possible loves, hopes and ambitions, and Sheers' own journey to the country to retrace his legacy. I loved the rendering of the African landscape, the way Sheers fearlessly weaves together fact and fiction - though clearly denoting the faultlines between his own imaginings about his great-uncle and the documented sources - and the way he takes on a difficult structural challenge and makes it work. I've been thinking a lot about the boundaries between history and fiction this year, and this book, for me, exemplifies that history always owes a debt to imagination and storytelling, even in the most scholarly biography.

4. Truth and Beauty by Ann Patchett

Again, I've written nothing before about the book that made the biggest impact on me this year. Ann Patchett relates the story of her friendship with fellow writer, Lucy Grealy, who died in 2002, with empathy, tact, and grace. Grealy was best known for her memoir Autobiography of a Face, which related her experience of living not only with a facial disfigurement, but one that was constantly changing as she underwent countless reconstructive surgeries (although countless is probably the wrong word here: both Grealy and Patchett obsessively count them). However, neither of these books (the title of Truth and Beauty is taken from one of the chapters of Autobiography of a Face) are about Grealy's face. Rather, Patchett writes about passionate friendship, the artistic struggles of both women, and Grealy's battles with self-loathing and depression with incredible honesty. When I reached the end of this memoir, I turned to the beginning and read it again; it's that good.

Reviewed on the blog here alongside Sebastian Faulks's A Possible Life, this novel - which describes itself best on the back, where it promises 'Christian missionaries, mountain tribesmen, invisible demons and crazed anthropologists' continued my interest in the stories we tell ourselves and how they become truth or untruth. (It's also a gripping thriller that Stephen King raved about.)

This family saga - which is about much more than just sexuality, although it deals with that topic very well - juggles absurdities and grotesque humour with realistic, fascinating characters, a feat that, in my experience, very few writers can pull off. I was enthralled by the three generations of this Greek-American family, and sorry to see it end. 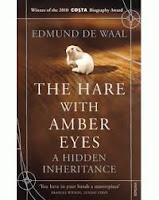 7. The Hare with Amber Eyes by Edmund de Waal

This book on the history of one group of Edmund de Waal's family heirlooms, Japanese netsuke, and their journey over a hundred years from Vienna to Tokyo (via Tunbridge Wells), is highly recommended; I avoided it for some time because it seemed to be so hyped, but this was a mistake. Like Sheers, de Waal imbues the familiar family memoir with new life, and switches seamlessly from past to present as he records his own researches alongside his family's experiences. By the end, the netsuke had become so familiar I felt as if I had actually held them in my hands.

8. Checker and the Derailleurs by Lionel Shriver

I reviewed this fabulous ode to spontaneity here. I think the clearest evidence that this book was a hit is that I'm still singing 'Lay perpendicular grates' to myself occasionally to my own, horrendous, tune...

This dated account (some of the science is interesting, to say the least) of the history of Antarctica, first published in 1960, might initially seem an odd choice, but I was so gripped by Euller's accounts of the voyages of Scott, Shackleton, and other Antarctic explorers that I had to allow it a mention. Reading those chapters returned me for a while to childhood absorption in a text, and I refused to put my historian's hat on and critique his retellings.

10. The Stranger's Child by Alan Hollinghurst

I plan to review this properly on the blog very shortly - I'll add the link when I do - so I won't say too much here, but Hollinghurst's eye for the detail of social interactions, and his depiction of the same characters as they age and change, but retain their essential selves, is truly brilliant. I won't normally countenance comparisons to George Eliot - and this is no Middlemarch - but I think this novel does deserve to be linked to her work, which is as much as anyone can ask for, really. ETA: link

So that was this year - ninety books read (as compared to ninety-nine in 2011, so fairly good considering PhD madness). As for my resolution to read through my TBR pile, it no longer exists in its original form - although a new one is currently forming from Christmas presents and £30 of book vouchers - and three of these books came from it, so reading through it was definitely worthwhile. Onwards...
Posted by Laura Tisdall at 15:41