'Part of that rough tribe of the mortal' 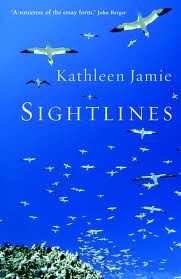 I'm a great fan of the increasingly popular genre of ‘nature writing’, with recent favourites including Robert Macfarlane’s The Wild Places and Philip Connors’ Fire Season. However, although it is not a genre that tends to produce terrible books, it can tend towards mediocrity; good descriptive writing abounds but truly exceptional work is rare. That’s why I was delighted to discover this marvellous book of essays – and sad that I hadn’t come across Kathleen Jamie’s work earlier. (Findings, her first collection, has shot right to the top of my to-read list).

These essays are an eclectic mix, spanning place, subject, and length – some are only a few pages long, others much longer. But nearly all are outstanding in one way or another. Jamie opens the collection with ‘Aurora’, a description of a journey towards the northern lights that is possibly the best piece she presents here, and certainly my favourite. What Joanna Kavenna struggled to do in hundreds of pages in her turgid The Ice Museum, Jamie manages in less than twenty, moving evocatively from a description of the ‘colossal, witless indifference’ of the surrounding icebergs themselves, to the radar screen that marks them out as a ‘rash of green dots’. She is also not above humour, which conveys a vital sense of herself and avoids the overly-stylised journalistic tone that sometimes afflicts travel writing. Reporting that some suggest that you can hear your own nerves working in the Arctic silence, she goes on to say that ‘Some people say you can smell icebergs, that they smell like cucumbers. You can smell icebergs and hear your own nervous system. I don’t know.’

I have reviewed this first essay in such depth because its strengths are, largely, the strengths of the other essays in this collection. As well as being a wonderful writer, Jamie is also superb at structure. This is demonstrates most strongly in a later piece, ‘The Gannetry’. Her sighting of the fin of a killer whale and race to follow the animal’s path around the island is infused with tension; you don’t expect nature writing to be page-turning, but this is. However, a structural choice that is, in my opinion, even more effective, is her juxtaposition of the description of the gannetry with reflections on her relationship with her son. This is initially frustrating when a seemingly irrelevant description of a text conversation between them interrupts the description of the killer whale chase, but is brought full circle when she reflects at the end of the essay that killer whale packs are matriarchal, meaning that grown sons remain with their mothers. There’s no need to spell out her own feelings about her son growing up and moving away from her, as she's done it all already.

As is probably obvious, I could quote endlessly from these essays, especially my other favourites, ‘The Woman in the Field’, ‘Pathologies’, ‘On Rona’, and ‘Three Ways of Looking at St Kilda’, but this review is already long. The only pieces that didn’t quite work, for me, were the shorter ones, but I think this was because Jamie did not give herself space for the full development of ideas that she manages in the longer essays, and not because they were in any way badly-written. I recommend this collection wholeheartedly, and can’t wait to read more of Jamie’s work.

In other news: I was thrilled to see Ann Patchett's State of Wonder on the Orange shortlist, as it was the best book I'd read on the longlist, and one of my top ten books for 2011. Madeline Miller's The Song of Achilles has also been on my to-read list for some time, so this is an extra nudge to actually read it! I was less thrilled to see The Forgotten Waltz by Anne Enright (because I hated The Gathering, and not sure I want to try any more of her work!) and Half Blood Blues by Esi Edugyan (because after trying and failing to read it for the Booker shortlist, I've concluded it's Just Not My Thing). As for the other two titles, I can take them or leave them, but I've ordered both from the library. A good shortlist on the whole, I thought, with the only notable omission for me being Jane Harris's Gillespie and I - this novel really hasn't had the attention it deserves.